At Sona, a festival from all over India 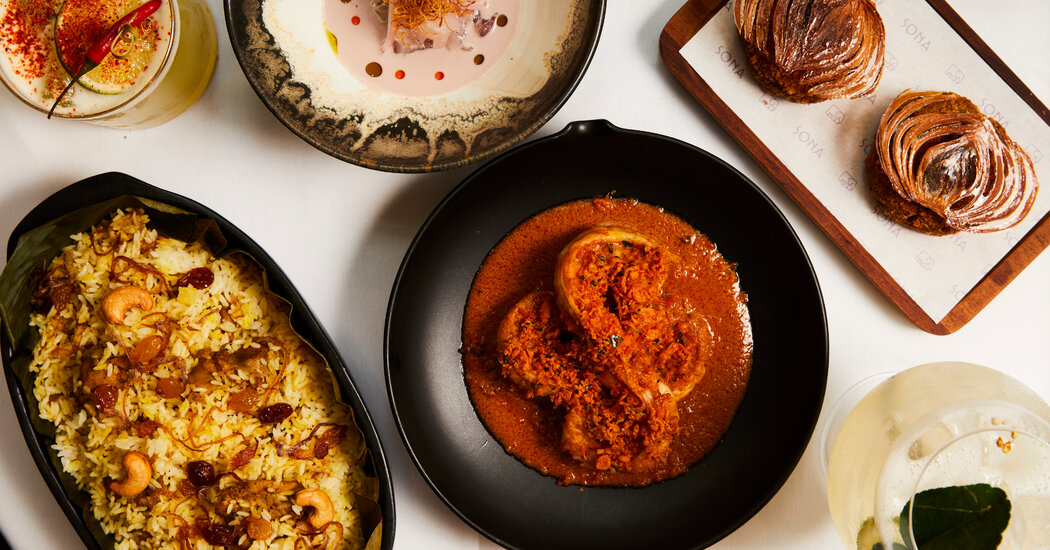 Mr. Nayak has divided the dishes that can be eaten as main dishes into four categories: Signature, Classic, Grilled and Rice. The last one has pulaos and biryanis, but not the simple $ 5 bowl of steamed basmati. (This goes under “Accompaniments”.)

If I could think of the Köfta Korma, I would call it a signature dish. The large meatballs with sheep’s milk ricotta in a pool of coriander and cashew sauce show what Mr. Nayak’s kitchen can do best. Inspiration is clear and treated with respect, even if Kofta don’t usually stand up like traffic cones. Contrasts come into their own because the crispy shell of the kofta, coated with sesame and cashew nuts, gives way to the delicate quark inside.

The recipe for grilled mussels with a chorizo ​​and white wine…

In addition to the Kofta Korma, a naan coated with butter and ground chillies with dark bubbles and an exceptionally tender cheese filling is served, perhaps because three slim cheese donuts alone will not fill you up. (You could spend an entire night exploring Sona’s Breads, the various kulchas, rotis, and parathas which are calming and exciting at the same time.)

It’s unclear who would want their name on another so-called signature dish, the spongy, strangely sluggish short ribs, and if I were to cook halibut in a banana leaf I would make sure it stays moister than the one I was served.

Don’t blame the banana leaf. There’s also one wrapped around the Malabar-style chicken biryani, and this time the effect is great, a carpet of spices woven through short-grain kaima rice and then sweetened with golden raisins and a spoonful of pineapple raita.

There is an admirable ingenuity in the way Mr. Nayak places a thin, see-through cross-section of fried onion on top of the onion jam spread over the Calcutta mutton chop, adding a natural elegance to what would otherwise be a brown fried puck, ground lamb. It’s one of several highlights on the starter menu, including a pink snapper ceviche in a tart coconut broth that gets its rosy color, tartness, and hard-to-place plum-like taste from kokum.

We call it: sage green is the kitchen color of the year 2021