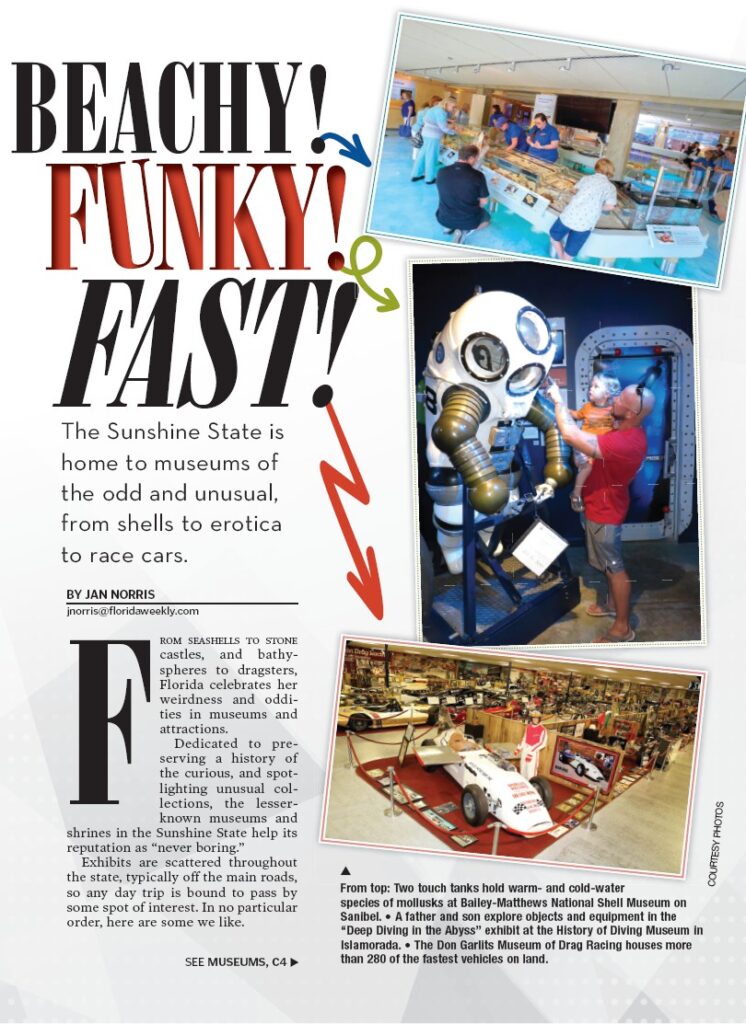 From top: Two touch tanks hold warm- and cold-water species of mollusks at Bailey-Matthews National Shell Museum on Sanibel. A father and son explore objects and equipment in the Deep Diving in the Abyss exhibit at the History of Diving Museum in Islamorada. The Don Garlits Museum of Drag Racing houses more than 280 of the fastest vehicles on land.

FROM SEASHELLS TO STONE castles, and bathyspheres to dragsters, Florida celebrates her weirdness and oddities in museums and attractions.

Dedicated to preserving a history of the curious, and spotlighting unusual collections, the lesser known museums and shrines in the Sunshine State help its reputation as never boring.

Exhibits are scattered throughout the state, typically off the main roads, so any day trip is bound to pass by some spot of interest. In no particular order, here are some we like.

Many are low-cost; discounts are usually available for seniors, military personnel, and kids. With COVID safety procedures in place, call ahead or visit websites for up-to-date times and admission information.

No Sanibel stoop is required here to view the thousands of shells in the carefully planned exhibits. Stunning sea specimens from around the world will have you rethinking the beach as a repository for unique treasures. 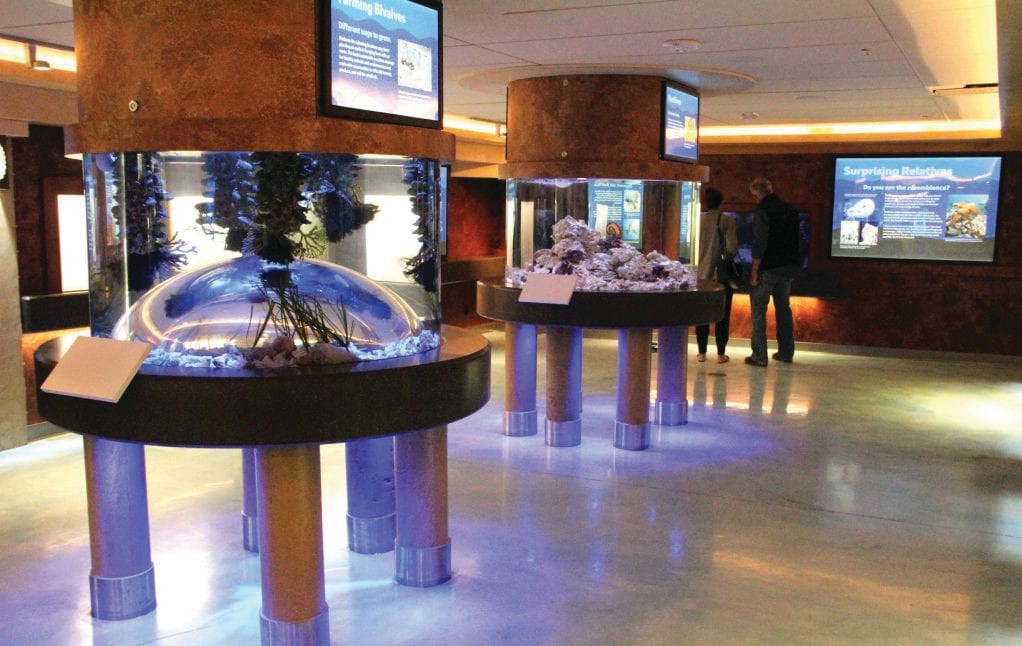 The pop-up mussel-farming exhibit in the foreground and one devoted to the nautilus behind it at Bailey-Matthews National Shell Museum. FLORIDA WEEKLY FILE PHOTO

Started in 1984 by a local shell collector, it attracted other collectors. Actor Raymond Burr (Perry Mason) was in on the groundbreaking of the museum as a campaign chairman. The museum opened in 1995 is now an international research and resource center for malacology: the study of mollusks.

Take in your bag of shells and learn their identities so you can be the smartest conchologist on the sand. It’s family friendly kids will like the giant Pacific octopus (it has its own webcam, too) as well as seahorses and other sea creatures in the museum’s live aquatic displays.

The museum’s newest section, a live mollusk exhibit, opened in March 2020, just as the state shut down public places, so it’s new to visitors who haven’t been in a while. Their blog is a fun look at a shell of the week. 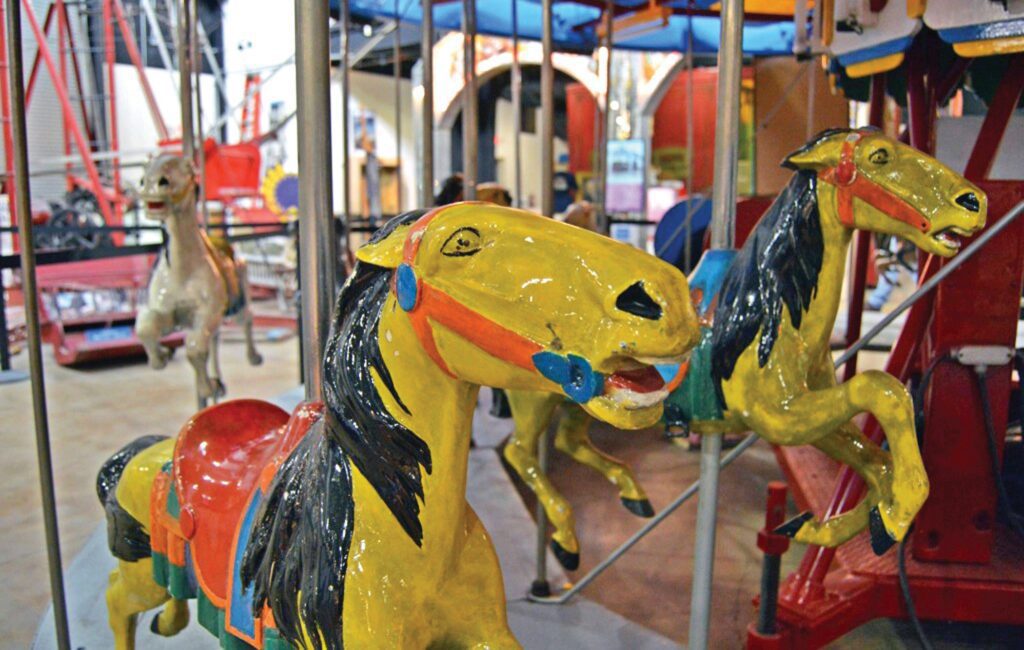 The Allan Herschell American Beauty Carousel at the International Independent Showmen’s Museum in Riverview is designed so people could ride two abreast.

Something about a carnival attracts the kid in all of us. So it has been as long as people have gathered for entertainment. From the soapbox medicine shows of the Old West to the theater troupes with colorful wagons from the 19th century, carnivals and showmen have drawn the crowds.

Here in a newer building, find more than 54,000 square feet of colorful and unique dioramas, photographs, and memorabilia from the traveling carnivals and fairs from a time when entertainment was live, and infrequent.

Few in America had seen a Ferris wheel or even read about it. Giants and Small People along with the hirsute and obese made for sideshows. Performers who awed could contort, walk a tightrope or handle snakes and train chickens.

Vehicles used to transport the troupes are featured as well as the artful advertising banners. 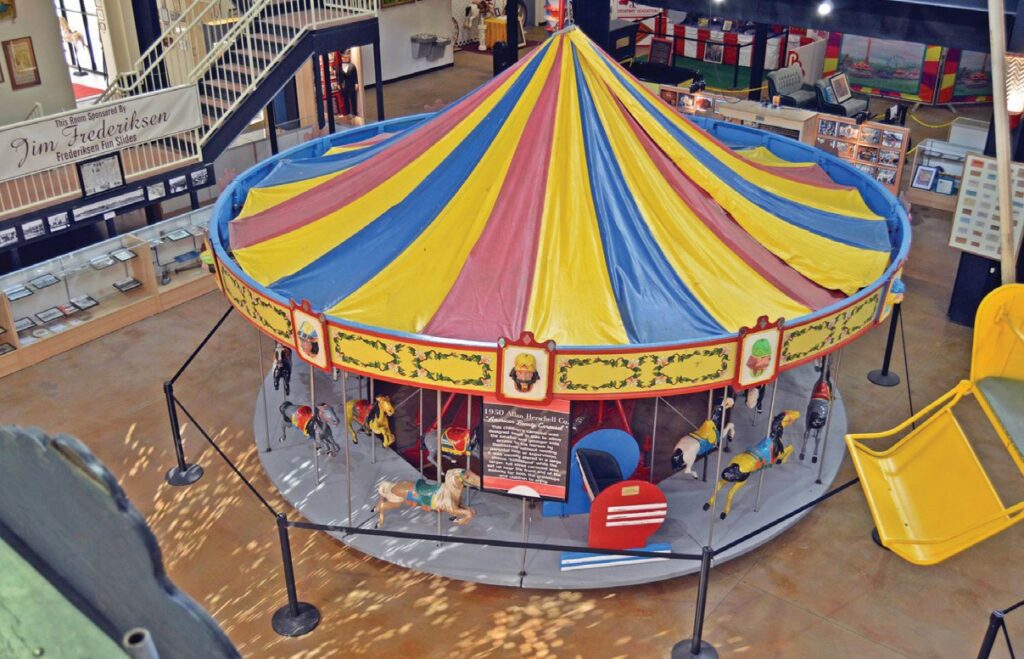 Artifacts from the rustic rides, games, sideshows and performers abound.

The costume exhibit is a study of the people once labeled freaks who attracted the disturbingly curious, with sizes showing the proportions considered abnormal back in the day.

An early Ferris wheel is set up, along with a working 1950s carousel, complete with aluminum horses.

The museum’s host is the owner; find him here on some weekends.

Here’s a museum of sorts dedicated to unrequited love. Ed Leedskalnin, the creator of this strange homestead, was jilted at the altar as a young man, and brought his broken heart to Florida from his native Latvia.

He came from a long line of stone masons, and so he did what he knew best once in Florida: built a castle of stone as a shrine to his lost love. In the Sunshine State, that rock was a form of limestone known as oolite. 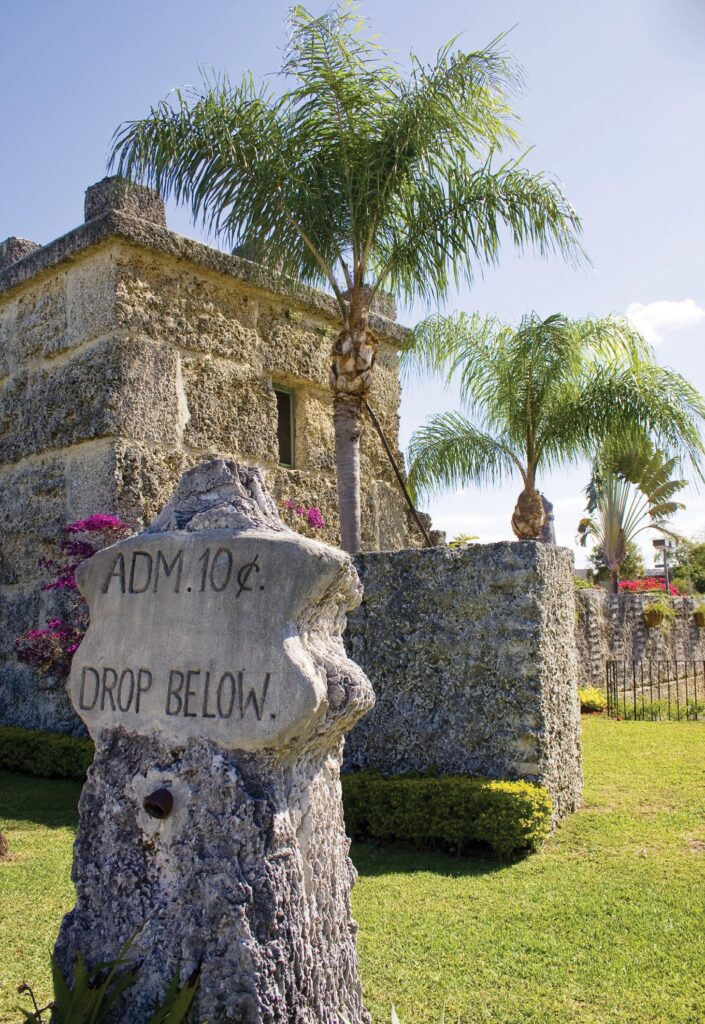 The Coral Castle Museum in Homestead was built as a tribute to lost love. It seemingly was constructed with no mortar and using ancient building techniques. COURTESY PHOTOS

Working alone in darkness from 1923 to 1951, the year of his death, he moved and carved more than 1,100 tons of fossilized stone using what he called the secrets of the pyramids. Homemade tools created the nine-ton gate that moves with a gentle push. A Polaris telescope and a working rocking chair are made entirely of the gray rock. Furnishings, walls and the tower are made completely from carved stone.

Even more curious, perhaps: The home originally was in Florida City 10 miles to the south. He spent three years moving it starting in 1936, to avoid development and to ensure his eccentric privacy.

Scientists and engineers still debate his methods, the secrets of which died with him. Megaliths pepper the sculpture garden, fastened without mortar and using balance and gravity to hold them up. The craftsmanship is exemplary.

In 1984, the curious castle was added to the National Register of Historic Places, cementing Mr. Leedskalnin’s place in Florida’s character-filled past.

The Don Garlits Museum of Drag Racing is in Ocala just off Interstate 75. If you’re lucky, Mr. Garlits himself will be visiting his museum.

Most travelers in Florida have gassed past this museum on a trip north, since it sits right off Interstate 75. More than 280 cars are fitted into two buildings, all dedicated to some of the fastest autos and grittiest drivers on land.

You don’t have to be a gearhead to know that Don Big Daddy Garlits, a Tampa native, is a legend in this hot rod sport, creating a safer rear-engine Top Fuel dragster after a particularly bad accident. He set a number of records with cars he built himself, racing at speeds of up to 272 mph. His most recent record was in 2019, at age 87, when he set a top speed of 189.03 mph. in an 800-horsepower electric dragster. 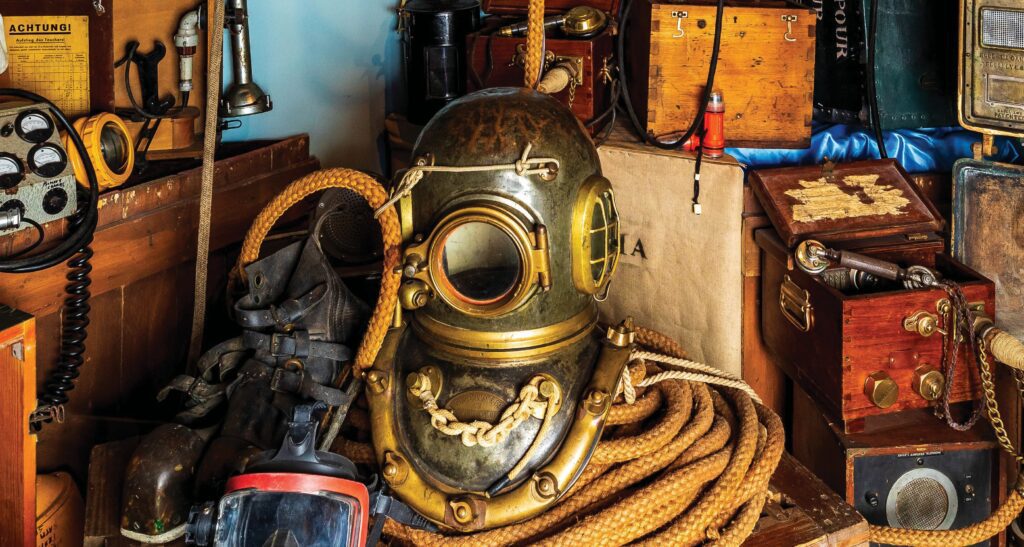 See hoods and diving bells and equipment used before SCUBA became a reality at the History of Diving Museum in Islamorada.

Several of his Top Fuel Swamp Rat cars are on display in the main building along with several others and a plethora of memorabilia from his six-decade career. His buddy Dean Moon, another icon of the sport, contributed his Mooneyes and Moonbeam cars, and other dragsters come and go.

In a second building is Mr. Garlits’ collection of antique and vintage cars of all types, as well as a display dedicated to the International Drag Racing Hall of Fame drivers and their crews.

Lucky visitors occasionally can find Mr. Garlits at the museum as his house is nearby.

More than 4,000 years of man’s dream to explore the underwater world are catalogued here, thanks to one couple’s dream. Joe and Sally Bauer put their renowned collection of diver history on display in 2005, and it’s continued to grow with the museum’s reputation.

Kids and adults will get a kick out of all the hands-on displays and learn about the many prototypes of hoods and diving bells and equipment used before SCUBA became a reality. Military gear and dangers involved in deep-sea dives are explained.

All facets of diving both recreationally and commercially are covered, including treasure diving. Visitors can see the beginnings of modern treasure hunters at an interactive exhibit of Art McKee’s work and lift one of the 70-pound silver bars recovered from a centuries-old shipwreck.

Fans of movies and books with famous divers (Capt. Nemo, anyone?) can get in on the current exhibit of Diving in Popular Culture, in place through the end of the year.

Other museums of interest

Randall Knife Museum, Orlando Back in the day, a man wasn’t fully dressed without a pocketknife. Here you’ll find one of the world’s largest collection of small folding knives and their larger cousins. It’s in the estate home of the founder of the factory it’s housed in, W.D. Bo Randall. 4857 S. Orange Blossom Trail, Orlando; 407-855-8075 or www.randallknives.com.

Mulberry Phosphate Museum A number of fossils, shark’s teeth and exhibits from the state’s phosphate mining industry are on display in the Polk County town of Mulberry. Kids can get in on “digs for various fossils in a gravel pile deposited from nearby mines and see the variety of changing exhibits. Adults get a look back at the state’s pioneering mine workers and their lives. 101 SE First St., Mulberry; 863-425-2823.

The Charles Hosmer Morse Museum of American Art Fans of Tiffany glass will want to check out this museum near Orlando. It boasts one of the most comprehensive collections anywhere of items by Louis Comfort Tiffany. 445 N. Park Ave., Winter Park; 407-645-5311 or www.morsemuseum.org. ¦

Things to do in Naples, Fort Myers

As the Naples Senior Center reopens, there are restrictions in place