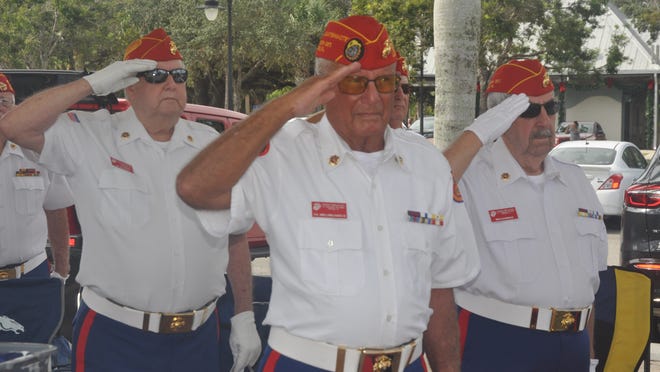 This was small-town ceremony, but it had a huge heart. Tears dripped down cheeks as Bonita Springs’ resident, Alex Herron, sung patriotic songs. As George Beshara, 103 years old, was recognized for his services to the country, a rousing applause echoed throughout the park. Silence settled when thirteen members of the Afghan Armed Forces who died in the evacuation were remembered with flags folded.

Riverside Park saw more than 200 attendees, from sheriff officers and local firefighters to veterans to general audiences, for Thursday’s annual Veterans Day event. The veterans came together to remember their loved ones and show gratitude to the servicemen and women who served. The ceremony was simple and not overly dramatic. It was more of a hometown ceremony that brought out strong emotions.

Local people and groups who made the effort to participate in the event added another layer of hometown pride. Herron is a VFW veteran and his grandfather fought in World War II. He has been participating in Bonita Springs’ Veterans Day and Memorial Day celebrations for 10 years singing patriotic songs.

Lt. Lieutenant Colonel George Beshara, a North Naples resident. A brick was presented to the air force veteran with which he was recognized. It was then placed on Riverside Park’s path. Beshara was born September 11, 1918. “good living and being very active,”His longevity is his key.

Darlene Manuel founded the Aisle of Flags at Bonita Springs Cemetery, 1995. Riverside Park now displays 100 flags in honor of servicemen and women every Veterans Day and Memorial Day. Manuel arrived at Riverside Park at 7:15 a.m. in order to set up the flags and was still there after the ceremony was over to take down and fold the flags. Bonita Springs Fire Chief Greg Dewitt and assistant chief Richie Scott were there along with Corporal Bobby Hunter of the local sheriff’s department who serves on the local Veterans Advisory Committee. Participation was also provided by the local VFW, Marine Corps League and other community organizations.

Jim McCloughlan was the keynote speaker. He is a Vietnam vet. He talked about the 43 million American’s that have worn uniforms in wars and of the nine million soldiers that died in WWI. The audience was left with homework assignments.

“Tell someone you love them and tell them why,”McCloughlan’s conclusion.

A ceremony in which 13 empty chairs were covered with folded flags was new this year. It represented those that had died during August’s suicide bombing in Afghanistan. Taps were heard throughout the park, bringing forth more tears.

“I have my hanky with me because I always cry when I hear the military songs,”Gina Hein, who was dressed as Wrigley when she arrived with Gina. “We come every year.”

Even the youngest audience members were learning about the events.

“It’s to honor our country,”Jackson Rowling 8.

“Thank you for veterans,”Scarlette Rowling was added to the mix,

The service concluded with an announcement that the Old 41 Bridge over the Imperial River has been renamed the Veteran’s Memorial Bridge,