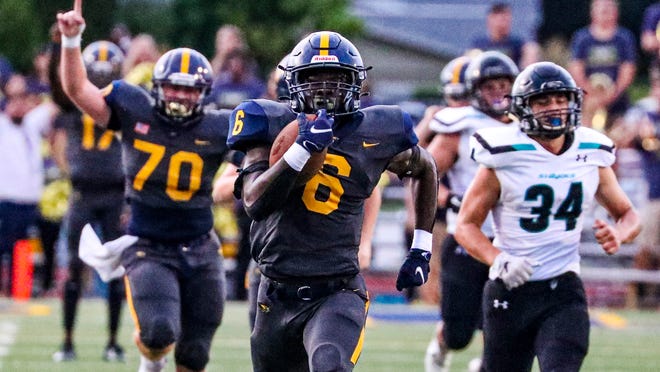 The News-Press and Naples Daily News high school football rankings are back for the 2021 season.

Each week we will rank the top 10 football teams from their coverage area (Collier and Lee counties, plus LaBelle). The power rankings are based on record, strength of schedule, and head-to-head matchups for the area’s 34 teams.

Here are the The News-Press/Daily News power rankings entering Week 2 of the regular season:

The Golden Eagles dominated Lehigh, the No. 3 team in the poll, in the preseason before doing the same to Gulf Coast in Week 1. Naples has a rare road trip this week when it plays at Fort Pierce-Westwood, a Class 7A team that went 7-2 last season.

If the talented Tigers had knocked off Port Charlotte in Week 1, they likely would have taken the No. 1 spot in the rankings. However, the game was canceled due to possible COVID-19 exposure within the Dunbar program. The Tigers are scheduled to play Bishop Verot this week.

More:Dunbar game at Port Charlotte called off due to possible COVID-19 exposure

Despite a lopsided loss to Naples in the preseason, Lehigh starts the season with a high ranking thanks to an impressive win in Week 1. The Lightning rode superstar running back Richard Young to a 28-22 victory over North Fort Myers last week.

The Green Wave showed off their impressive defense in Week 1 with a 35-2 win over Riverdale. Not only did the defense not allow a point (Riverdale’s only score came from its own D via a safety), but it also scored a few of its own on Ranod Smith’s 99-yard interception return.

Although the Red Knights lost their season-opener, they hung tough with the No. 3 team in the rankings. Despite giving up more than 200 rushing yards in the first half, North Fort Myers nearly came back in a 28-22 loss to Lehigh. The Red Knights play Riverdale this week.

The Bears showed they still have some weapons despite losing key players to graduation. In a Week 1 win over Key West, Jaden Booker rushed for more than 150 yards, while his older brother, quarterback Hosea Booker, guided the offense in his first game as the full-time starter.

The Vikings needed overtime to get past Lely at home last week. However, Bishop Verot was playing without its top two receivers. While the offense took a while to warm up, the Vikings’ defense held Lely scoreless in the second half. Verot has a huge test this week against Dunbar.

The Wolfpack raced to a 21-0 lead in the first quarter before taking their foot off the gas. South ended up with a 28-6 victory over Cypress Lake. Nathan Castor, one of the area’s top returning players and a Division I prospect, rushed for nearly 100 yards.

The Trojans nearly pulled off an upset on the road last week, losing 21-20 in overtime on a blocked extra point. Lely’s offense still is looking for consistency after it built two-touchdown leads each of the past two weeks, only to be shutout in the second half. The Trojans have a bye this week.

The Lions didn’t have much of a test in a 36-0 romp over first-year program Ambassadors Christian. FBA went up 28-0 in the first quarter, and the starters didn’t play much longer. The Lions face a big test and a long road trip this week when they play at Andover High, a public school with 1,700 students in Massachusetts.

Things to do in Naples, Fort Myers