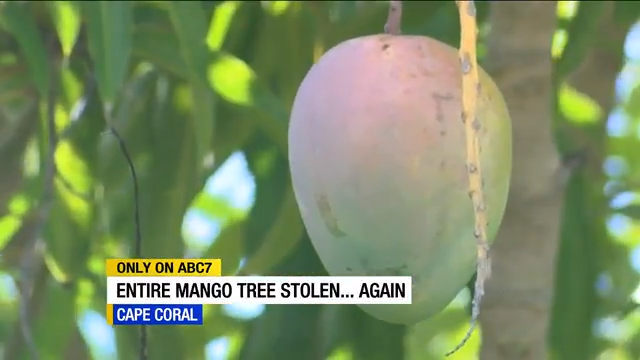 CAPE CORAL, Fla. – A Cape Coral woman is left feeling victimized after an entire cotton candy mango tree was stolen from her front yard twice in the past three months.

Mary-Ann Schwartz lives on Southwest 30th Street, Cape Coral. She discovered that her blossoming mango tree was removed from her yard in June.

“They took the roots and all. There’s no roots left,” said Schwartz in June.

Schwartz expressed her anger at the theft but her primary source of frustration was the fact that the mango tree was something she enjoyed with her daughter with Down Syndrome.

“She’s going to be very disappointed to see this mango tree gone,” Schwartz stated this in June.

After the community heard of Schwartz’s mishaps, some people stepped up to help. Michelle Lock from All Around Tree Specialists in Cape Coral donated a larger cotton candy mango to Mary.

“I instantly tried to find her and jump on it,” Lock said. “I wanted to replace it for her because that’s just heart-wrenching.”

The original tree was stolen days before the new one was planted. Schwartz and her family went on vacation to Cincinnati in September. She returned to find her tree had disappeared.

She stated that she does not know who or why the tree was taken. She said she hasn’t broken the news to her daughter just yet because she knows it will upset her.

Schwartz said she will be replacing the tree, but she’s adding new security measures, and she’s being tight-lipped about them.

“I’m not going to say anything about that. Mums the word,” said Schwartz.

Call the Cape Coral Police Department if you have any information about this incident.

Where to Eat in Cape Coral