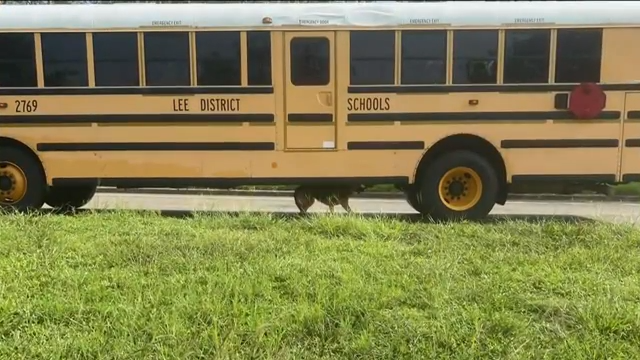 CAPE CORAL, Fla. – A chaotic scene unfolded on Del Prado Blvd after a german shepherd named Ginger was run over by a school bus Monday afternoon.

Lori Berroa said she was driving around the adjacent neighborhood searching for a missing dog.

Berroa said she watched the dog get spooked by bikers and that’s when Ginger took off into oncoming traffic.

“The dog was not hit by any cars, cars were all stopped and the dog went,” Berroa said. “We tried to get the dog out but it was too scared.”

A mother who had a 12-year-old boy on that bus said her child was devastated after witnessing the incident.

“I called him at 5:30 to check on him and he was crying hysterically and hyperventilating. The way my son was hysterical you would have thought it was our dog. He said that he saw the dog and they made him go and he was just devastated,” the mother said.

“This dog was safe under that bus, it was not hit, it was alive and it was scared and it needed our help and we failed that dog. The officers failed that dog,” Berroa said.

Cape Coral Police said that’s not what happened saying an off-duty officer came to the scene on her way home from work.

Since she was off duty she did not have her body cam on but she turned on her dashcam which Corporal Phil Mullen said actively shows the officer trying to help the dog.

“Everybody tried to get that dog out from under that bus safely. They tried. The officer did not order the bus driver to drive while the dog was under the bus,” Mullen said.

CCPD says the officer came back to her car while other people tried directing the bus driver but in their attempt to move the bus killed Ginger.

In a statement, CCPD said: This was a very sad and unfortunate incident but was NOT done in a willful or negligent way.

“The Cape Coral Police Department would like to make a statement regarding the accident that occurred yesterday at the 3300 block of Del Prado Boulevard North, involving a Lee County School District bus and a German Shepherd, Ginger.

A CCPD officer happened upon the scene on her way home from work, where Ginger had run under a school bus on a busy two-lane stretch of road. The officer called it in to dispatch and activated her lights, as well as her in-car dash camera.

The officer returned to her vehicle several yards away in order to move her vehicle up to block traffic from the bus and Ginger. While the officer is away from the bus, it appeared citizens continued to try to coordinate the bus moving away safely, and when the bus attempted to move Ginger was caught under the tires and tragically killed.

Upon seeing Ginger had been struck, the officer drove back up to her and is seen on video donning gloves to help a citizen move Ginger. According to the officer her offer to help move Ginger was refused.

The officer was on her way home off-duty when she stopped to assist, and had thus already docked her body camera at the station for download.

The dash camera did not have audio capabilities outside of the vehicle.

The officer did NOT order a driver to proceed in disregard for the dog’s safety.

All of us here at the Cape Coral Police Department are animal lovers and never want to see harm come to them. This was a very sad and unfortunate incident, but was NOT done in a willful or negligent way.”