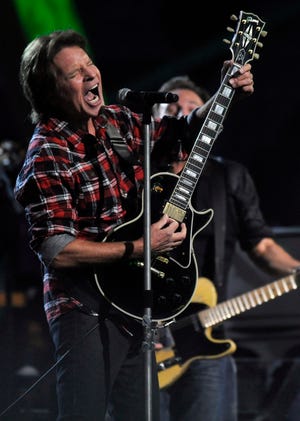 Note: John Fogerty’s Tampa and Orlando shows have been cancelled. However, the Hertz Arena concert will still be held. The Charity Pro’s, a Fort Myers non-profit organization wrote on Thursday that they were sad to have to cancel the Charity Pros for Heroes events in Tampa Florida. All Internet orders placed via Ticketmaster.com are automatically cancelled and refunded. Any other refunds will be processed at the place of purchase.

The Charity Pro’s are going big with their latest fundraiser.

It is really, really huge.

They’re not just doing one concert at a major Florida arena. The Fort Myers nonprofit is doing three — all with headlining rock legend John Fogerty of Creedence Clearwater Revival.

Why are they doing all this?

For the kids, of course.

“It’s really important to us,”Megan Maloney, founder. “Because we want to be able to have a lot of money to provide the educational scholarships and do a couple of Megan’s Wishes for these children who lost their heroes — and our heroes.”

This is the first major, in-person fundraiser for the fledgling nonprofit, which hopes to grant wishes and hand out scholarships to the children of healthcare workers and first responders who died from COVID-19.

“Nobody’s done anything for these kids,” says Brad Maloney, director of operations for the nonprofit.

The mini tour starts Saturday at Tampa’s Yuengling Center. Then it moves Sunday to Estero’s Hertz Arena and Tuesday to Orlando’s Amway Center.

Brad Maloney explains that it only made sense to contact Fogerty again for an in-person live performance. Then Fogerty’s team suggested booking them at more Florida venues and turning it into a mini-tour, and they decided to do just that.

Fogerty will be a huge draw. Tickets for the Hertz Arena show were already nearly half sold out in November. The other shows are selling more slowly, Brad Maloney says, but he hopes ticket sales ramp up as the concerts get closer.

After all, who doesn’t love John Fogerty?

“He’s never played here (in Fort Myers), and look at how many hits he’s got,” he says. “Everybody knows his songs. They’re iconic.”

All of the acts and arenas were booked at full price, he says, so The Charity Pro’s have to recoup their expenses before any ticket sales go to charity. But all direct donations — made via raffles and donations on the charity’s website — will go straight to the nonprofit’s programs, he adds.

Fogerty wasn’t available for interviews, but both Bishop and Foreigner bassist Jeff Pilson say they’re looking forward to the shows.

Foreigner’s never played with Fogerty before, Pilson says, and the band’s members are huge fans.

“I’m just really excited,” Pilson says. “When I saw it on the schedule, I was absolutely floored and quite happy.”

Fans can expect Foreigner’s biggest hits at the Hertz Arena show, he says, including “Juke Box Hero,” “Urgent,” “I Want To Know What Love Is” and “Feels Like the First Time.”

Mick Jones is the only original member left in Foreigner, Pilson says, but don’t worry: The songs sound pretty much like you remember them.

“Sure, we add our own thing,”He said. “(Singer) Kelly Hansen has his own voice, you know. But it stays very true to the melodies, because we love the melodies.

“We love those performances. So when it ain’t broke, don’t fix it (laughs).”

As for Estero teenager Bishop, these will be the biggest venues biggest audiences she’s ever played outside of the “American Idol” stage — where she made it all the way to fourth place before getting voted off the show in May.

She has plans to sing “The Star-Spangled Banner”She also sang a few songs with fellow musicians for her short, acoustic set. “Idol” singer Wyatt Pike on guitar. They’re still working on the setlist.

Bishop admits she’s a bit nervous about her first arena shows, but she expects that’ll go away once she takes the stage. “It’s a mix of nerves and excitement,” she says, “because I really don’t know what to expect — especially an arena full of people like that. It’s just mind-blowing.”

Brad Maloney describes concerts as the nonprofit’s. “first real fundraiser.” April’s virtual show only raised about $5,000, he says, and they’ve only been able to grant wishes for two kids so far: A cell phone for one, and a trip to Orlando for another. The wishes are granted through a program called Megan’s Wish.

They’re still raising money for scholarships, though, and haven’t given out any yet, he says They’ve also started a new scholarship program called the Tony Christensen Future Firefighter Fund, named after a Naples firefighter who died of COVID in August 2020.

“Tony was the first firefighter in Florida to die of COVID,”Brad Maloney. “He was my childhood friend, and he was a Naples firefighter.

“We’re having his family at the concert, of course, to honor him. And we’re launching the Future Firefighters scholarship. That’s going to give some financial assistance to young adults that want to make a career in firefighting.”

ThecharityPros.org offers tickets as well as information about how to sponsor, donate, or purchase tickets.

Connect with this reporter: Charles Runnells is an arts and entertainment reporter for The News-Press and the Naples Daily News. Email him at [email protected] or connect on Facebook ((facebook.com/charles.runnells.7), Twitter (@charlesrunnells) and Instagram (@crunnells1).

Information and tickets:Thecharitypros.org and ticketmaster.com