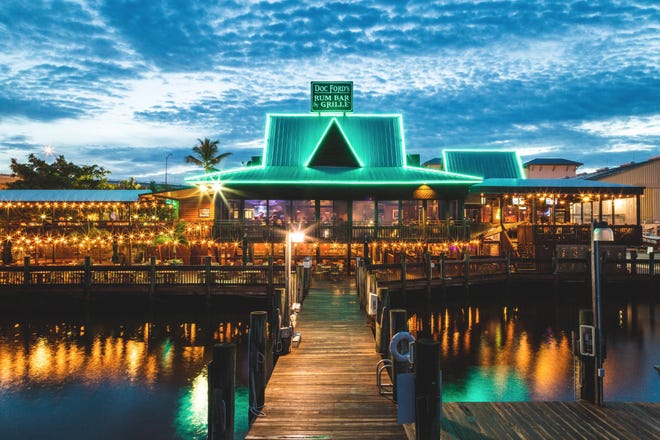 One restaurant in Fort Myers Beach was named the best in the country.

Tripadvisor has named Doc Ford’s Rum Bar & Grille on San Carlos Island as the # 1 Everyday Eats restaurant in the US as part of the Travelers’ Choice Award for “Best of the Best” Restaurants 2021.

“I’m not exaggerating, I am surprised every day when I wake up to what happened to these restaurants,” said Sanibel writer Randy Wayne White. “It’s true. We had no idea what to expect when we started Doc Ford’s.”

The Fort Myers Beach restaurant outpost opened in April 2009 and was the second location for the regional chain that debuted on Sanibel in 2003. White, a bestselling author and former News Press columnist, named the restaurants after one of his most famous characters. Marion “Doc” Ford, a former National Security Agency agent who retired to become a marine biologist on Sanibel but never left her dangerous past behind.

White’s “Doc Ford” series comprised 20 novels from 1990 to 2020. The Doc Ford restaurant group wasn’t quite as productive. At least not yet. In addition to Sanibel and Fort Myers Beach, there are Doc Ford’s on Captiva and on the St. Petersburg Pier. White said a fifth Doc Ford’s is in the works for St. Pete Beach, with a tentative opening for the spring of 2022.

In case you missed it:Rumrunners is closing in Cape Harbor after 18 years

Related:Randy Wayne White on his new book ‘Fins’ and why he won’t swim in parts of the Caloosahatchee

White said he owns the Doc Ford franchise while his partners, Marty Harrity and Mark Marinello, own and run the restaurants.

“Marty, he used to be a football coach at Bishop Verot, so he has that motivation and team building expertise. Mark, he’s just brilliant when it comes to business, real estate and all that,” White said.

“They know what they’re doing. I just write books and write the menus and pretend I’m nice.”

White estimates that in Doc Ford’s early days, 20% of customers came just because they read his books. He and his partners knew it would only get this far, and so, according to White, they used their energies to make Doc Ford’s an experience, not just with a novel theme, but great service and great Meal.

“These rankings are based on reviews from people who have eaten there in the past year,” Tripadvisor communications specialist Casey Brogan said via email. “As challenging as the year was, restaurants across the country still delivered amazing cuisine and experiences to diners – something that is definitely worth celebrating!”

Yelp Rankings:What are the top restaurants in Fort Myers, Naples according to Yelp reviews?

Did you know already? Fort Myers is one of the best places to live near the beach, says US News & World Report

Fort Myers Beach Doc Ford’s has a large open-air deck overlooking Matanzas Pass. A terrace that, according to the restaurant’s staff, has remained busy since its dining areas reopened in the summer of 2020 following the outbreak of the pandemic.

Another restaurant in Fort Myers Beach, The Doghouse, also achieved a spot in the Tripadvisor rankings and was ranked 9th in the US Quick Bites Restaurant category.

How Tripadvisor selected these award winners, the press release states that its selection will be “calculated based on the quality and quantity of the restaurant reviews and ratings posted on Tripadvisor, running January 1, 2020 through January 30th, plus an additional editorial process . “

A full list of the 2021 Tripadvisor Restaurant Winners can be found here.

Annabelle Tometich writes about food and restaurants for The News-Press and Naples Daily News. Connect with this reporter: @atometich (Twitter); @abellewrites (Instagram); or atometich@news-press.com.