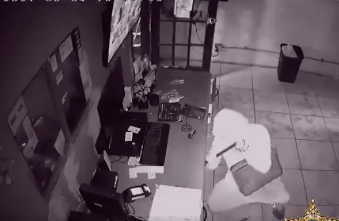 NORTH FORT MYERS, Lee County – A brave burglar is caught on camera violently opening a till to get his way. This happened at the Tire Discount on Pondella Road in North Fort Myers. Now the shopkeeper says he knows exactly who the masked thief is.

“These are the people we need to get off the streets. They’ll do it to everyone else. ”Shop owner Yunior Sanchez said.

“A week and a half ago he broke into the building again, damaged the front door, stole the scanner, broke into the till and took the money with him.”

Sanchez is caught in front of the camera and says that the man in the video who pried his till and stole a car scanner is actually a former employee of his who is breaking in for the second time in 2 months.

“Because of the way he moves and his body shape. I could tell you, you know? “He said.

From the video alone, Crimestoppers says it’s obvious this man knew his stuff.

“Very, very good possibility that this person has been in the business before and has some thorough knowledge of the business, he knew what he wanted.” said Trish Routte of SWFL CrimeStoppers.

Now they are hoping someone can help identify and track down the thief before he does it again.

“If you don’t get him this time, he’ll be back to do more damage to my business.” Yunior added.