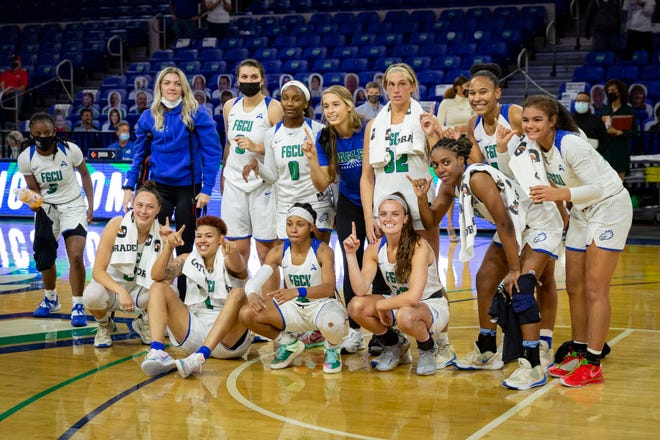 The FGCU women’s basketball squad is ranked #1 in the national polls for the first time since 2006.

After getting ranked 24th in the USA TODAY Coaches Poll last Tuesday, the Eagles (23-2), who have won 22 straight, were ranked 24th in The Associated Press Top 25 on Monday afternoon.

Karl Smesko (FGCU coach) said, “We are certainly excited to be ranked.” It means that we have gained a lot national respect for the way we played this season. To get to the Top 25 again in both polls we had to play really well and work hard. I believe our players will enjoy this moment.

FGCU lost its top 7 scorers from last season and was therefore the only team that moved up in the rankings. DePaul (25th), lost twice in the poll to be eliminated. Despite being 24th, the Eagles barely made it in. Their 54 points was one more than that of No. 25 South Dakota State was awarded the highest number of points and Marquette received two more.

Junior Tyra cox is third in both the polls at No. 25. She had been the highest returning scorer last year with 2.3 points per games, but this year she’s the number three. This is something that I was fortunate enough to be able to observe in my previous years. But, being involved and a major factor has been an amazing experience. We are so eager to find out what we can accomplish this year, I’m sure.

The Eagles have just completed a 16-0 ASUN slate. This was capped off by sweeps of Liberty and second place Alico Arena. At 23 games, they have the longest winning streak on the road in America.

The Eagles only loss is to AP’s No. 15 Arkansas in overtime and No. 21 Missouri State at the Gulf Coast Showcase in Alico Arena. Both of these were played without Kierstan bell, an Ohio State transfer, who was given immediate eligibility after just three games. Junior Tyra Cox missed four games because she had a hand injury.

Bell and T.K., a junior-college transfer Morehouse, who is a point-guard and averages 17.6 per game, was recently ranked among the best two Division I scoring teams.