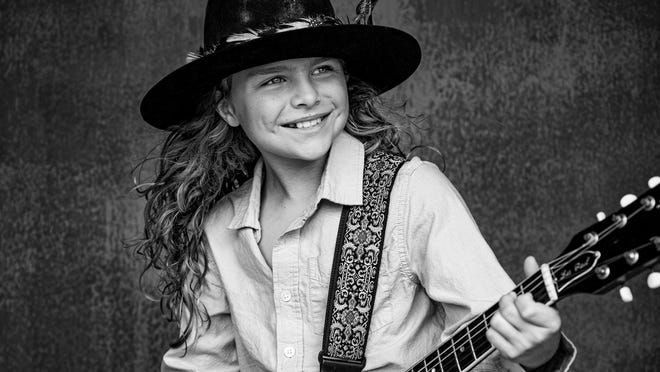 Superstar Brad PaisleyKnows everything about amazing guitar playing. He’s often called one of the best players in country music.

Jaxon talked with Jaxon before his performance with guest-host Paisley about getting into the blues, the origin of his stage name — it’s a reshuffling of his real name, Jackson Champ Winkler — and how it’s hard to get into bars when you’re withYou can still enjoy the music, but you are not yet old enough for it to be a drink.

“When I was first starting out with the band, I couldn’t get into those bars without a guitar in my hand,”Jaxon (11 years), of Punta Gorda. “But now, since I’ve been in the local newspapers and the news and whatever, I’ll show up and they have my Shirley Temple sitting on the bar. And they’ll be like, ‘Oh, hey Champ!’”

This singer/guitarist can be seen performing at bars and festivals throughout Southwest. FloridaHe has also shared the stage with Southern rock legends the Marshall Tucker Band — twice.

Nate Winkler, his father, introduced Jaxon to the blues, Southern rock and Southern music by getting him playing Gov’t Mule (early Rolling Stones) and other music at home. Jaxon then saw The Allman Brothers Band. withHis dad and his grandparents attending a Live Oak music festival Florida.

Jaxon was only 3 years old at the time, but that show changed everything for him — even if the concert was way past his bedtime.

“It was like midnight,”He said this Tuesday during an interview withThe News-Press. “I was asleep for half the show. But the portion that I saw was like seeing fireworks. That’s kind of all I remember. Just the sounds.”

Afterward, Jaxon found himself noodling around on a ukulele he’d brought withHe was a great help to us at the campsite. It’s a musical fire that never died down, and Jaxon eventually graduated to the guitar.

He took up the habit of taking photographs. guitarWhen he was six years old, he learned lessons and then was tagged along. with his dad — a musician who now plays rhythm guitar in Jaxon’s band — at open-mic nights. “I played guitar and he’d sing a song or two sometimes,” his dad says.

‘The Voice’:What’s next for singer Ryleigh Plank: An EP, concerts and more

That motivated Jaxon to practice more — he plays guitar for at least an hour every day — and he performed for his first official gig in March 2019 at Cape Coral’s Big Storm Brewery.

He knows a lot more now, of course. And he’s only gotten better at playing the guitar, too.

That’s why Paisley looked forward to Jaxon taking the concert stage on Wednesday’s “Ellen.” He’d watched a video of Jaxon performing, but he wanted to see how the kid sounded live.

“Get your guitar on and get ready to scald this audience,” Paisley told him.

Jaxon obliged by playing the song “Born in the Grove” from The Champ Jaxon Band’s recent debut album, “The Grove.” He co-wrote the song with some of his musical friends and his dad.

“It’s about being from Florida,” he told Paisley. “When most people think of Florida, they think of sandy beaches and fancy hotels and whatever. But my song is basically just about the 15 miles inland of the beaches where it’s swamps and shacks and rednecks.”

The audience cheered and clapped along as Jaxon — dressed in black with a bear-claw necklace and a Lone Hawk-brand feathered hat — played the slow-burning blues number peppered with impressive guitar solos and licks.

After the commercial break, Paisley came out with a surprise for Jaxon: A new Brad Paisley Fender guitar.

Jaxon grinned and his eyes lit up. “Wow!” he said. “Thank you so much! This is awesome!”

“When I give it away, I usually say, ‘Learn how to play it, kid,’” Paisley said. “But it’s too late for that. You already know.”

Then Jaxon and Paisley closed out the show with an instrumental blues jam where they traded guitar licks back and forth.

That — and the rest of the show — is something Jaxon says he’ll never forget.

“It was an amazing experience,” he said Tuesday. “It was crazy.”

To learn more about Champ Jaxon and his music, visit champjaxon.com.

Connect with this reporter: Charles Runnells is an arts and entertainment reporter for The News-Press and the Naples Daily News. Email him at [email protected] or connect on Facebook (facebook.com/charles.runnells.7), Twitter (@charlesrunnells) and Instagram (@crunnells1).