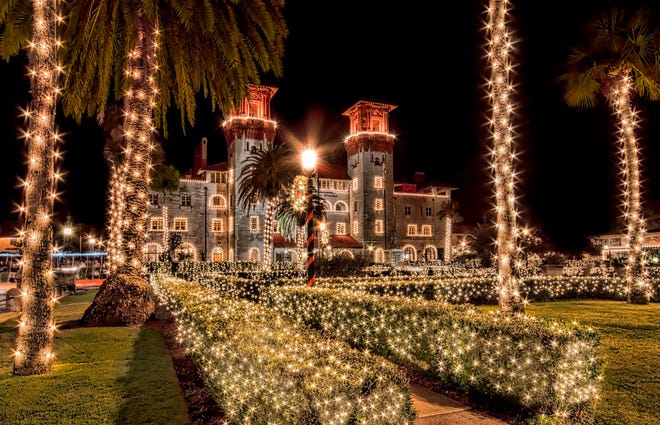 Florida’s downtowns, small towns, neighborhoods and historic cities light up during the holidays every year.

These are sponsored by the city, and others are neighborly events where neighbors decorate their homes to allow others to walk or drive past.

Many last a few weeks, usually between the weeks of Thanksgiving and New Year’s. St. Augustine’s Nights of Lights, however, lasts for over two months. It runs from November 20 through January 31.

Every one is different and well worth the trip to visit.

Nights of Lights in St. Augustine has been named one of the top 10 best displays in the world by National Geographic, and it’s in our backyard.

From Nov. 20 until Jan. 31, the historic city will dazzle visitors with white lights in the Plaza de la Constitucion, along the bayfront and around other parts of downtown.

It is now the 28th annual display that features millions of white lights.

It all kicks off on Nov. 20 Saturday with Light-Up! Night, when the city’s lights are flipped on during an evening a 6:30 p.m. ceremony in the Plaza.

Many restaurants and shops stay open late during the holiday season, giving you plenty to enjoy during your visit.

But walking isn’t the only way to enjoy the lights. For different perspectives, take a trolley tour, boat ride or helicopter flight.

On certain days of the season, there is a complimentary park-and-ride service provided by the city. For information about parking, tours and other ways to best experience the lights, go to floridashistoriccoast.com/nights-lights.

The Ancient City is lit up by LightsNights of Lights organizers are betting on St. Augustine to be a very busy holiday season

Victoria Park Naples is lit up by Neighbors

Every year it seems there’s a bigger and better holiday light display winning a top award on a TV show.

But there’s nothing better than driving through a neighborhood where it seems every house has captured that Christmas spirit – more than one house per street or a few in a community.

Victoria Park is a great place to do this in Naples. These neighbors deck their homes, garages, trees and more every Halloween, too, but that’s just the appetizer.

This tradition began over 30 years ago, and it seems that residents continue to increase the number of cars on their streets every year. And residents don’t mind lines of cars slowly cruising down their streets, with passengers gazing in wonder of the creativity with lights and displays.

Some streets are even equipped with lighted arches to illuminate the road, creating a subtropical paradise.

“Many nights, we’ll sit out on our front porch and just watch people drive by and wave,”Brooke Austin, a resident of Victoria Park, told Naples Daily News that she will be moving to Naples in 2020. “It brings us joy seeing other people experience joy looking at the lights.”

How to get there: Victoria Park is actually in what’s considered North Naples, but it’s easy to find. You can simply Google these words “Victoria Lane Naples Florida” and you’re in the heart of the community.

Inspire by Christmas VacationThe best Christmas lights displays in Naples might be found in this area, which is part of a holiday tradition.

Let It Glow in Ocala

Theme: Light up Ocala “Let it Glow” for 2021, its 37th year, is the city’s largest holiday tradition. Colorful photo opportunities abound with Santa, Mrs. Claus, the Grinch and the holiday tree. Visitors can make use of shuttles to travel between three main entertainment stations with live music and performances or enjoy the Junior Sunshine Parade, featuring local dance studios, Boy Scouts and Girl Scouts troops, Cub Scout Packs and a special appearance by the man in red.

Be sure to also check out over 100 vendors in historic downtown Ocala for arts and crafts and mouthwatering food, or bring your children, grandkids, nieces and nephews to the interactive kids zone built to entertain the whole family.

The spirited events culminate with the push of a button as thousands of twinkling lights turn on at once, dazzling the downtown area.

Because the COVID-19 pandemic is ongoing, visitors are encouraged to wear face masks, social distance and frequently sanitize their hands.

More information can be found online at www.ocalafl.org/lightup. The event will be held on Nov. 20 from 4 to 9 p.m.

You can plan your holiday season.Ocala Christmas events and other holiday celebrations

Pensacola has a Winterfest

Pensacola Winterfest officially starts on Black Friday with the parade and ends on Christmas Eve. You can also find great events starting the previous week.

Winterfest’s concept revolves around the theme-themed trolley tours, which illuminate Pensacola’s downtown from Historic Seville and to the Palafox Business District. Holiday trolley tours and live performances will be offered to visitors. Santa Claus and other holiday characters may also visit the area.

Tickets can be purchased ahead of time for Cajun Christmas, tours (Polar Express, Grinch or Scrooge), and photos with Santa or the Grinch. It is important to make reservations.

Nestled along the Gulf of Mexico and boasting miles of Intracoastal Waterway, the Sarasota-Manatee community’s most famous holiday traditions include lights, palm trees and brightly decorated boats.

A tradition dating back to 1989, the Venice Christmas Boat Parade of Lights in south Sarasota County takes place the first Saturday in December. Spectators line the Intracoastal Waterway and gather at places such as Pop’s Sunset Grill and Pelican Alley with the parade starting above Albee Road Bridge and heading south with a turnaround before Circus Bridge. The same day should also find the third annual Bradenton Beach Holiday Boat Parade passing by places such as historic Bridge Street Pier on Anna Maria Island in Manatee County, just south of Tampa Bay.

Sarasota Manatee also has holiday events that take place on the land. Highlights include Lights in Bloom at Selby Gardens (Dec. 11-23, 26-30 and Jan. 1-2) and the annual Pinecraft Christmas Day Parade hosted by Sarasota’s Amish and Mennonite community.

Sarasota’s best:Here are 10 top places in Sarasota to see (and what you should do once there)

With more than 1 million lights, Dazzling Nights at the Jacksonville Arboretum & Botanical Gardens is set to become the city’s must-see holiday attraction in 2021.

The lights and interactive displays include a 30-foot lighted Christmas tree and 65-foot lighted tunnel along the winding, three-quarter-mile paved Lake Loop Trail at the arboretum, one of Jacksonville’s hidden treasures. Event organizers have confirmed that there will be (manufactured snow) in the forecast.

The 51-night event, which makes its debut in Jacksonville this year, follows its launch in Orlando in 2020.

Dazzling Nights is open 5:30 to 9 nightly, from Nov. 19 to Jan. 9. The cost of tickets is $22 for weekdays and $25 on weekends. They must be bought in a specific time slot. A shuttle service will be provided to transport visitors from Regency Square Mall’s parking lot. There is limited parking available at the arboretum. You can find more information at dazzlingjax.com.

You can see more:There are many holiday events happening in Jacksonville, St. Augustine, and other areas.

Here are some things you can do this weekend during Thanksgiving in Naples.