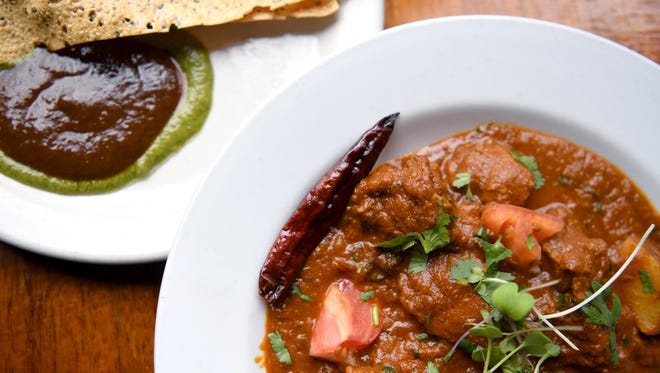 Sounds sticky, we know. Think about it.

The regions known for fiery cuisine — India, Central and South America, Southeast Asia, much of Africa, the Caribbean — are also known for their blistering temperatures.

It’s already hot on the outside so heat it up inside.

This combination has many benefits. The combination of spicy foods and sweating can make you feel cool. Perhaps this is why Thursday was chosen by the Eating Powers That Be as National Hot & Spicy Food Day.

It’s scorching in this country. Let’s cool off by firing things up with five spicy dishes from around the globe and places to find them around Southwest Florida.

The outwardly Indian dish is rooted in Portugal, but has deep roots in England. Vindaloo, which is the most fiery curry in Indian restaurants, started out innocently. The word is a corruption of the popular Portuguese dish carne de vinha d’alhos, a simple braise of meats marinated in garlic and white vinegar. The Indian version of the dish was introduced to India by the Portuguese in the 15th century. Local cooks also added spices such as cinnamon, black pepper, and cardamom.

And then came the English. They’re the ones who brought the heat by tossing an unholy amount of chilies into the dish when it made its way to Indian-style restaurants in the UK. Vindaloo, which is the American equivalent to hot wings, can be found on the other side of the pond. It’s designed to cause a bit of pain. If you’d like more heat, the Brits can do one better than vindaloo with a dish called phall. This English creation is not often eaten in India. As Curry Culture described phall, it’s “a creation aimed at men (mainly) who want to prove they are ‘hard’ by eating it.”

The Jamaican dish of jerk has roots in both the Caribbean’s Taino people and the Maroons. They are descendants of those who fled British slavery to make a new life in the rugged mountains in Jamaica. Much like the culinary traditions born from U.S. slavery — barbecue, fried chicken — jerk is a means of turning cheap, tough cuts of meat into something not only edible but delicious. Historians believe the original jerked meat wasn’t chicken but wild boar hunted by the Maroons. According to Smithsonian Magazine: They would season the meat using allspice berries and salt. Wrap it in pepper-elder leaves, then cook it underground in pits. This dried the meat so it could be stored for future use — much like jerky. Jerk is an integral part of Jamaican culture, and can be found in high-end restaurants as well as school cafeterias. The Jamaican diaspora has spread the Jamaican jerk dish around the world. Modern recipes often use garlic, thyme, and fiery Scotch bonnet Peppers as well as traditional allspice.

From 2018:At Spice Caribbean Grille in Fort Myers, smoke and magic — JLB review

This cool combination of grilled meat and raw vegetables is great for the heat and humidity. They say there are as many yam neua recipes as there are cooks in Thailand. Like all Thai dishes, this one touches each part of your tongue: sweet, sour, salty, bitter — and hot. The heat is from Thai bird chilies. These are combined with fish sauce, palm sugar, lime juice, and made into a delicious dressing for hot-from the-grill beef. Add in some lettuce, cucumber and tomato, maybe some leafy cilantro, maybe some mint, and you get a dish that’s as cool and refreshing as it is tongue-tingling hot. This dish is similar to nam tok, or “waterfall beef,” although nam tok usually gets its heat from dried chilies not fresh ones.

FROM JLBBangkok Thai is not just a Thai restaurant. It’s so much, even more.

Bun bo Hue can be described as pho’s spicy, richer Vietnamese cousin. Made with vermicelli noodles and beef stock, bun bo Hue departs from pho thanks to fermented shrimp paste, sugar and chili oil, which gives the soup its signature thrum of heat. Chowhound reports that traditional bun Bo Hue is made with thicker, spaghetti-like rice noodles. It can be topped with cubes of congealed pig’s blood and sliced banana blossom, as well as traditional pho accompaniments: lime wedges, onion, Thai basil. The name’s “bun” or “bo” refers to the rice noodles and beef. The original source of the dish is Vietnam’s former capital, “Hue”.

While this Peruvian traditional sauce isn’t the spicier of these, it’s delicious. This nuanced dressing is made from lime juice, cilantro and Peruvian aji-amarillo peppers. We have even seen it on crudite platters. Aji sauces in a variety of styles and spice levels are available throughout the Andean region from Colombia to Chile. Cooks in the United States often substitute jalapeno and serrano peppers to replace the difficult-to-findaji amarillos. This sauce can be found at most Peruvian restaurants, and we have many. We decided to make it at home. You can also eat it with everything!

Blend all ingredients in a food processor or blender. Blend the mixture until it is smooth and green. Taste the sauce and adjust the seasonings to your liking. Blend in olive oil if it is too spicy. Blend it again until you have the right amount of spice.

Keep covered and in the refrigerator up to a week