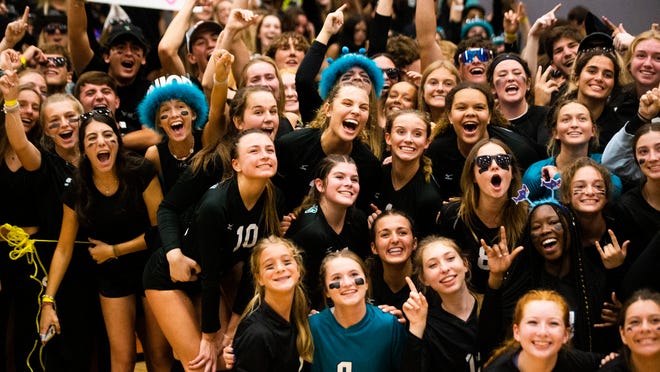 It had been 736 days since the Shark Tank was as full of students as it was Tuesday night.

The chants and dedication of the Gulf Coast Student Section known as the Anti Kitty Committee when the Sharks play against the Cougars was crucial throughout the game.

“Having been here for 15 years, every year but last year, I’ve had a hard time dealing with it as a coach,” said Sharks coach Christy Wright of the Gulf Coast student division. “We talked about just enjoying it. Don’t ignore it, enjoy it, but then focus. Come in, look around, appreciate the fact that all of these people are here to watch you, to cheer you on. There is no pressure because they are here to support you.

“So many people never get the chance to play in front of such an audience. How often do you go to a gym where there are so many people? It just doesn’t happen. It’s just here. When this audience gets going with (Barron’s) audience, it’s unlike anything I’ve ever experienced. I’ve been training for 22 years. It’s completely different. “

Tuesday night was the first home game against Barron Collier for second grader Aisha Keric, who played for Seacrest last season. Keric has never played a game in the Shark Tank before this season.

“It definitely kept us going,” said Keric. “Even when we were down, after every point they radiated energy that helped us get through. It was a bit intimidating at first, but I don’t think we would have made it without her. “

The Sharks fell back on the Cougars early in the first and second sets, but eventually recovered in both sets. Wright said her team didn’t play well but it was good enough to win on Tuesday night.

“We know that if we throw teams off balance, they can’t get their offensive going and if they can’t stay in the system we have a much better chance,” added Wright. “None of our clubs was really up. You were gone a bit tonight. I was proud of them because they just kept grinding. We didn’t drop the ball as usual. We were a little out of step in our offense, but I’ll take it. We won. Marina (Rau) had a huge break-in at the penultimate point. We did everything we had to do. “

Reese Tremitiere, who returned to center stroke for that game, bet seven blocks and used her basketball frame to fend off any Barron Collier spikes. Lily Lucas finished with 13 kills, bringing her total to 171 in the year.

“That’s huge,” Wright said of the seven blocks from Tremitiere. “That’s probably more than the total we had the rest of the season. I know she could do even more. She came in and made a difference in the beginning. I know she wanted this because it was her last Barron game and that’s a big deal. “

On Thursday, Gulf Coast (12-4) face Napoli at home while Barron Collier (13-6) will attempt a three-game skid against Palmetto Ridge at Cougar Den.

Riverdale 3, Lehigh 0: Brayden Hipp set another record in the Raiders Sweep over the Lightning 25-9, 25-12, 25-2. Hipp is the new ace leader in Riverdale’s career after serving 10 aces along with 27 assists. Logyn Geren added 12 kills for the Raiders, bringing their total for the season to 308.

SFCA 3, Moore Haven 0: The King’s took another win with their sweep over Terriers 25-8, 25-10, 25. Sophomore outside Bianka Noah led the king’s attack with nine kills, followed by senior outside Lydia Coggins with eight.

These rankings were largely in line with the latest power rankings from The News-Press / Naples Daily News, with the exception of Gulf Coast and Barron Collier, which were flipped.

CSN was the best team in the region, finishing 19th and 8th in class 3A. Now Seacrest Country Day is number 29 in the state, but number 1 in Class 2A. The Stingrays are in a good position and have a chance to bring a volleyball state title back to Collier County.

Canterbury (No. 40) and First Baptist (No. 50) finished third and fourth in the area, while Riverdale (No. 65) completed the top five.

Barron Collier (# 68) was ranked ahead of Gulf Coast (# 72), although the Sharks won the first encounter against the Cougars. Barron of the Gulf Coast should be skipped in next week’s rankings, provided the Sharks don’t falter against Naples.

The Naples relay of Chevaldova, Brisson, Layton and Naghib also won the 200 medley and 400 freestyle relays.

Oasis 5, Riverdale 0: Kat Hagler rolled a 245 with eight punches and three spare rounds for the Sharks.

Oasis 179, Canterbury 221: The Sharks were led by Senior Alyssa Fritz, who scored a 3 under par 33 in the lower round of the match. She was followed by newcomer Riley Fritz, who shot a 34, senior Sophia Jul (46) and newcomer Willow Cain (66).

The sharks were led by newcomer Gabe Gair, who shot a 44, followed by junior Jimmy Cain (47), junior Eric Feichthaler (48) and newcomer Corbin Odjick (49).

Sam Kodak and Oliver Marshall led Napoli to victory as each shot a 36.

Training sessions will begin for the 2021-22 season at the FGCU Basketball Center, both men and women.