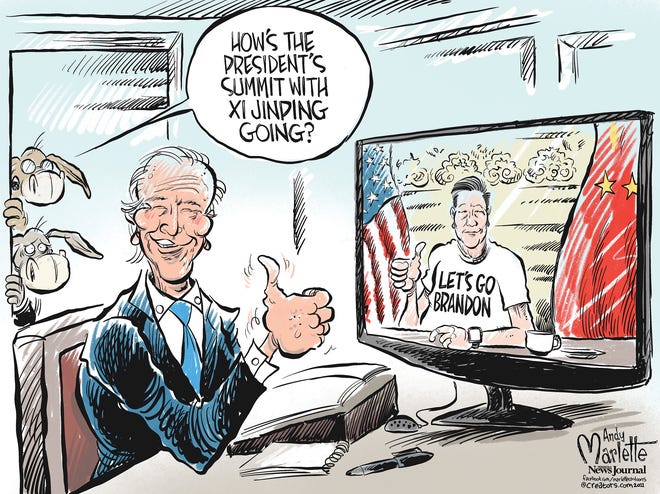 As a new resident of the Shell Point community, I’m astonished Shell Point’s President Martin Schappell was left off the Community Foundation’s list of the top 30 nonprofit executives of 2021.

The community was saved by Mr. Schappell during the horrible COVID-19 epidemic. New residents were later drawn to the area after the pandemic.

His staff as well as residents have shown high levels of volunteering. A remarkable 31 volunteer opportunities are available for residents. In addition, Shell Point has offered a scholarship opportunity for local high school students who have an interest in the hospitality industry; the Giving Back program, connecting assisted living residents with ways to participate in the community; and Operation Christmas Child Collection Week.

Unlike some cities that have been unable to fund infrastructure improvements, Shell Point has built an  interconnected network of sidewalks and bicycle paths, replaced aging sewer and water pipes and is within two months of installing a new Wi-Fi, TV and telephone system.

Shell Point recently completed two important buildings, the Tribby Art Center and Larsen Pavilion. Recently, the Tribby announced that its 2021/22 Concert Series has sold out. The Larsen Pavilion for skilled Nursing will be open in January.

All of this has been accomplished within the 2021 budget with a proposed 2022 budget increase of  less than 3 percent.

Mr. Schappell has a participative  management style, sets high standards for the Shell Point staff and leads by his own example.

On Nov. 10, the Labor Department reported that consumer prices jumped 0.9 percent in October, and 6.2 percent from a year ago. It’s the fifth straight month higher than 5 percent. The rate is also the fastest since 1990. The Labor department said average hourly earnings fell 0.5 percent in October, with real wages down 2.2 percent since January.  Our purchasing power is declining, as has our standard of life. This is despite substantial government spending that dates back to 2020.

Transfer payments that reduce the incentive to work have now created the worst labor shortage in years. So much for 4.6 percent unemployment rate. This problem can also be caused by mandates for vaccines.

While natural gas and gasoline prices have increased, U.S. production has fallen. This is by design. Biden wants to shut down U.S. drilling companies and asks OPEC for more oil. Biden would like to close another Canadian-American pipeline. This is despite rising energy costs.

All of us are affected by living in Biden’s world.

Many Republicans are unable to attend the bill-signing

The once-in-a-generation infrastructure bill has been signed into law and, even though 19 Republican senators and 13 representatives voted in favor of benefitting the country and their constituents, few of them attended the signing as they are being castigated by you-know-who and his sycophants for agreeing to help the country’s crumbling roads, bridges, airports, rails, water and internet alongside the Democrats. Two-thirds of Americans favor the bill and, after it’s implementation and explanation, this number will only grow. Instead of touting their cooperation and the benefits thereof, these cowards are afraid of someone who still thinks he’s president and who has convinced so many ignorant followers of the same. It’s just a matter of time when the Republican members who voted against progress will be taking credit for the improvements to come. When are the sane citizens of our country going to come to their senses and vote out the weak-kneed followers of a phony, illegitimate leader?

On Sunday during his historic zoom with Xi, President Joe Biden said that he favors one China and then he said he favors Taiwan’s independence. Joe’s confusion seems to invade every topic in his disjointed world. Joe was able to be seen laughing and mouthing Xi’s statement that Xi wasn’t his friend. “thank you.”

Although his main presidential campaign concern was the impact of the pandemic and he didn’t question the Communist Chinese Party leader about its origin, it is clear that Xi did not ask him. Joe can’t pass on the chance to meet Xi. Joe can’t face a strong enemy. He is afraid to show America’s strength, preferring to meekly sit in the shadows and allow our enemies to take full advantage.

Russia is putting troops up at Ukraine’s border and Biden has no comment. He feels intimidated and can only smile as he walks away from strong leaders. In November, the American people voted for Biden. Now they see that their decision was wrong.

Lee deputy is shot after a dispute near prison

Antilles is a hot spot for amenity fans clubs