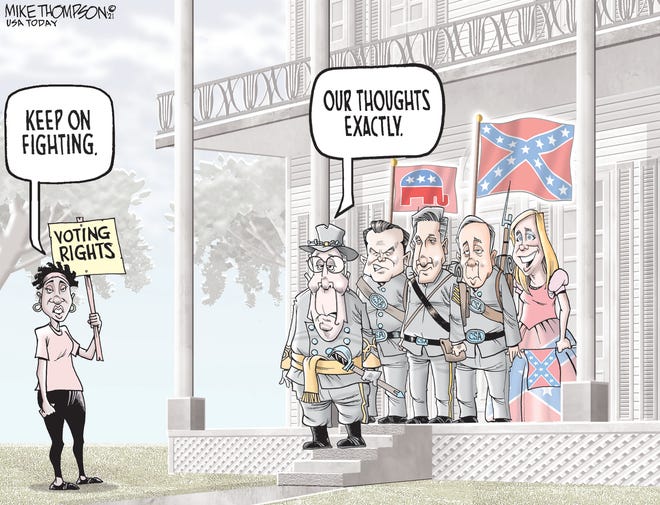 What happened to reason, common decency?

As I drove along Fort Myers Beach’s beach road, I noticed a pick-up truck flying a flag reading, “F____ Biden!” Every child is welcome. It is okay to be angry. I also understand that one must express their feelings. Although I fully support the freedom to speak freely, where is common decency?

Then, I saw a news story that said Gov. DeSantis offered bonuses to anti-vax cop officers in Florida, and he is trying to recruit them. I read that just a few minutes before I read on the front page of this newspaper that COVID-19 is the leading cause of death of police officers in Florida. Is this the end of reason?

50th Anniversary for the golf community

Our history today is often forgotten or reduced to a mere memory. I am happy to see that The Glades Golf and Country Club in East Naples, one of the original golfing communities in the Naples area, is taking time to reflect on the community’s history with A Walk Down Memory Lane — a historical display of information regarding the development of this ever-vibrant community during The Glades 50th anniversary celebration weekend Nov. 5-7. Kudos for providing a time for reflection. We wish that The Glades will continue to foster the warmth, beauty and spirit of an era past for many years.

Trumpism not a ‘cult’

Below is a list of philosophies that Donald Trump supporters have adopted:

In response to “Republicans Abuse Debt Ceiling Process:” Prior to 1982 the U.S. federal debt was less than $1 trillion. The debt has increased by $15.11 trillion under Republican Presidents, while $13.04 trillion was added by Democratic presidents. Without Trump’s COVID spending, the Democrats would have outspent Republicans. Stating that Republicans are the cause for 75 percent of the debt is misleading and the type of dangerous hyperbole that simply adds to the animosity we currently see in Washington. This is for Republicans and Democrats alike. When will our spending be sustainable? To get rid of politicians that are only interested in getting reelected, we need to set term limits. If you don’t care about getting re-elected, you will be able to make difficult decisions now that our broken Congress is missing.

Nothing new in vaccines for the military

According to a recent newspaper report, the Liberty Counsel (a tax-exempt religious liberty group) has filed a class-action suit in federal court requesting injunctive relief for military members from or stationed in Southwest Florida from being required to obtain COVID shots. As I remember, persons entering basic training in the Army receive immunizations for measles, mumps, rubella and tetanus among others. Additional shots are needed for advanced or dangerous duty stations. The big fuss over a COVID shot is why?

In the past there has been an epidemic of smallpox and polio.

Did there exist organized attempts to stop vaccines being given at that time? Are there militant and die-hard conservatives opposing them? That would be a shame, but it is what I would like to see. These diseases have been brought under control!

Florida has witnessed nearly 60.000 COVID-related deaths. I wonder how many were not vaccinated. Most likely. Is your next step?

Biden is a catastrophe

One of these letter writers is deluded. He says Biden isn’t perfect after blagging the Republicans. He’s not perfect. A complete failure.

Open borders letting in crime, drugs and illegal immigrants, Afghanistan withdrawal was a complete disaster, inflation is rising rapidly and will ruin our economy, gas prices have doubled in nine months now that we are no longer energy independent, and if that’s not enough he wants to add $3.5 trillion to our already unsustainable debt. It is expected that the Republicans will take control of both the Senate House of Representatives in 2022 and bring some sense back to this country.

Grande refers to Ryleigh plank as “the real deal”