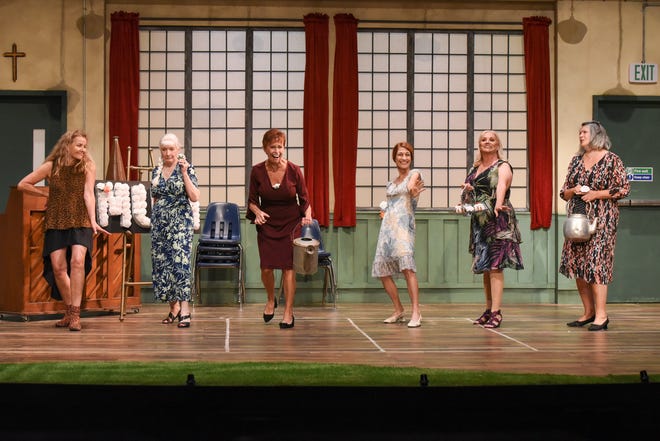 Consider, for a moment, shedding your clothes in front of your entire neighborhood, bestowing a come-hither smile on them as you do.

If you’re blowing into a paper bag at the very thought of it, you’re probably in the majority.

Six local women do this five times per week for “Calendar Girls”, the current Naples Players production. The Tim Firth play is based on the true story of British housewives who put themselves on a pinup calendar to raise money for leukemia research.

Your community has purchased the idea: All shows are sold-out. (There may be a waitlist, but see the information box.

And perhaps even bigger than that, a dozen community women leaders stepped forward late last year to duplicate the feat on which the play is based: A calendar showing them in the altogether — or at least the intimated altogether. It has raised an astounding $50,000, primarily for hunger causes — and it hasn’t stopped selling yet.

No one will ever know whether the first motivation to buy the calendar was to help pandemic victims or to see community leaders as intimate human beings. But the $25-suggested-donation calendar has sold wildly, according to Bryce Alexander, CEO/executive artistic director of The Naples Players

The proceeds are being distributed to organizations that work with hunger causes by the Community Foundation of Collier County, and it recently received a windfall. When the annual Celebrity Martini Glass Auction local needs fundraiser was cancelled because of the pandemic, its sponsors agreed to instead match the calendar fund’s income.

“So now the Community Foundation will have $100,000 to distribute because of this calendar,” said Alexander, clearly delighted.

“There was certainly a little hesitation at the beginning,” he said of the calendar. To get everyone’s temperature, we had to have a luncheon. It was “Yeah I’ll do that, but I don’t want be the only one doing it.”

Meeting other willing high-power heroines cemented the plan, he said.

The Naples women worked with a professional photographer most of them knew, Charlie McDonald, for their slyly suggestive spreads. Naples Players offered an intimacy coach to six community actresses who were selected for roles in “Calendar Girls.”

Tampa-based Daniel Granke, certified with Intimacy Directors International, worked with the cast, Alexander said: “He was making sure the women have a voice in saying what they are or are not comfortable with. He came in on day one to say this is how we are working through to the nudity.”

“The nudity” is all relative, but having an advocate impressed Peggy Monson, in her first stage role with the Naples Players.

Even all the backstage crew — dressers, stage manager and assistant stage managers — were female, she said: “Bryce is so smart and so talented and does everything so well.”

Monson stated that Monson was “very comforting and thoughtful” because she had resisted the temptation to use her dramatic skills onstage. Her last role, 45 years ago in the classic Greek comedy, “Lysistrata,” another case of women making waves: Wives banded together to withhold sex until their men renounced war.

Monson protested, “Not because I’m a troublemaker of nature.”

The best fiction is grounded in reality

She plays the instigator, Chris, who comes up with the idea to raise money to buy a full-size settee for the hospital that serves their small British village.

“I’m about to prove that it’s possible to take a photo that celebrates corporal beauty of the mature human form without any indecency,” she declares to her nervous friends. They then have to all deal with Act II.

The play actually began as a film taken from the project of a group of Yorkshire friends trying to raise money for leukemia research after one of members’ spouses died from it. Since then, the film has been made into a play and later a musical.

Firth, cowriter on the film version of “Kinky Boots”, wrote it. Firth was also the cowriter of the screenplay along with Juliette Towhidi for “Death Comes to Pemberly”, which is a British television series.

Monson loves the play because of the sister-like bond between the women. Monson said that the villagers were attracted to their determination by their ability to buy the calendar.

“I think it’s the spirit behind it — the spirit of these women,” she said. They rally when one of their husbands dies.

Harriet Howard Heithaus writes about arts and entertainment for Naples Daily News/naplesnews.com. Contact her at 239-213-6091.

TicketsSOLD OUT. However, waitlisting for the same day’s performance begins at 2 o’clock in the morning. People can sign-up for tickets and then go to shop or eat. Then check back for availability

Another: The production will be indoors. However, the theater is only half full to allow for social distancing. Indoors, patrons must wear facemasks.