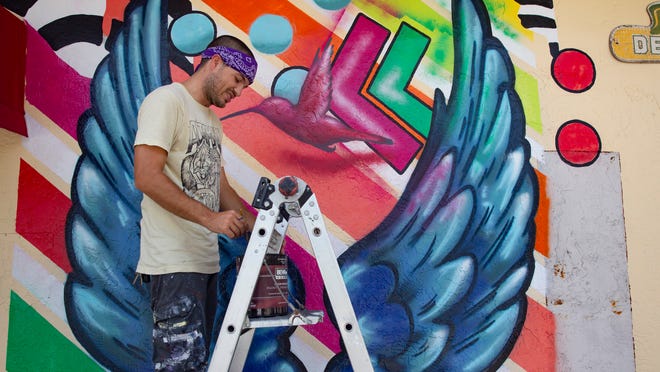 If you think your customers are angels, you want to let them know.

When you own a groundbreaking restaurant like Spanky’s Speakeasy that is returning to its full potential for these angelic customers, you’ll want to celebrate it in a unique way.

Those two thoughts were a marriage in heaven, and their descendants are a western mural with oversized wings that allow any customer to become an angel on earth. Ted and Emily Monty, owners of Spanky’s Speakeasy, 1550 Airport-Pulling Road. N., Naples, hired the local artist Marcus Zotter to create the 3 x 2.40 m mural made of blue wings with an ombré pattern.

There is no devil in the details either: Zotter’s bright geometry can be found around the wing: diagonal and zebra stripes, polka dots and chevrons. A lone hummingbird hovers over its fellow flyer.

The winged appearance, which changes depending on who is standing in front of the mural, also has its own pet. Bubbles, one of the five English bulldogs of the Montys, became the model for Zotter and was natural. (To celebrate the completion of the mural, she appeared in her own Bubbles wrap, a polka dot dress with a ruffled collar.)

“Everyone knows our bulldogs. They can be found all over the restaurant. There are floor-to-ceiling pictures of them in the ladies’ room,” said Emily Monty. So it was only natural to add one to the mural, she said. The hummingbird came from Zotter.

“It’s a different feeling of nature. I love to paint animals or birds because I love nature and I always try to incorporate some into my paintings. Birds also convey a sense of movement,” he said.

Both Zotter and his subjects are well known in the area. He has mastered a number of styles, from the portrait of Anthony Bordain that graced the former Seventh Avenue Social restaurant, to a somber street scene at AZN in the Mercato, to a wall dedicated to the founder of Mama Mia’s Pizza on US 41 North .

Winged art has become a calling card in many cities, where visitors are looking for their special wing mural to display. “Nashville has a really famous angel wing mural,” she said. “Big cities, small cities – they all have them.

“I said, ‘I love these wings and Naples doesn’t have anything like that,'” Monty remembered her decision. A mural would also be work for an artist, and the Montys liked the idea of ​​supporting local art for everyone after the lean year of the pandemic. She found Zotter’s work on Instagram.

“I called him and an hour later he was at the hostess’ booth,” she said. “I gave him my vision and somehow he took it over. He created this masterpiece.” Zotter offered her two options: Simply the wings she had wanted, or the wings on a background of colorful geometries, tailored to her taste and the Spanky decor, rich in memorabilia. The latter was an easy choice.

Zotter is known for his wall paintings in the area. These include the portrait of Anthony Bourdain that adorned the former Seventh Avenue Social restaurant, a rain-soaked street scene in the AZN in the Mercato and a wall dedicated to the founder of Mama Mia’s Pizza in US 41 North.

Marcus loves children:Local artists paint with ‘A Step Up’ kids in Immokalee

After Zotter finished the mural of the wings, he worked on a mural for a popular cause, The Sunshine Kids, a center for children with cancer on 1395 Panther Lane in Naples.

“I have to be as grateful as possible to everyone,” he said. “I had two months off like every two months, but after that, when things opened up, I was the busiest artist I’ve ever had. I just want to thank everyone.”

Zotter did not make this mural under the most favorable circumstances. The Tropical Storm / Hurricane Elsa threat to southwest Florida delayed its start.

“Then we fought the heat and rain that afternoon,” remembers Monty. “So he worked early in the morning, then unfortunately we are not open.”

That dashed the hopes of Spanky’s regulars, who planned to pull up a chair, have a drink, and watch the art process. Still, Monty is satisfied with the result: “He’s just so talented.”

Also, she said, the mural adds Spanky’s Whispering Pub as a landmark.

“I enjoyed traveling to the US attractions with my parents as a kid. These landmarks that you see when you grow up are remembered. I have photos of myself with me, ”she recalls.

“Ted and I have owned Spankys for six years,” said Monty. “Everyone knows our room for their vintage signs and all the little things inside. Our idea was to keep the landmark that we have, but to bring in a bit of ourselves. That is our addition. “

Would you like more local news? If you are already a subscriber, thank you! If not, please subscribe and help get the most local news.