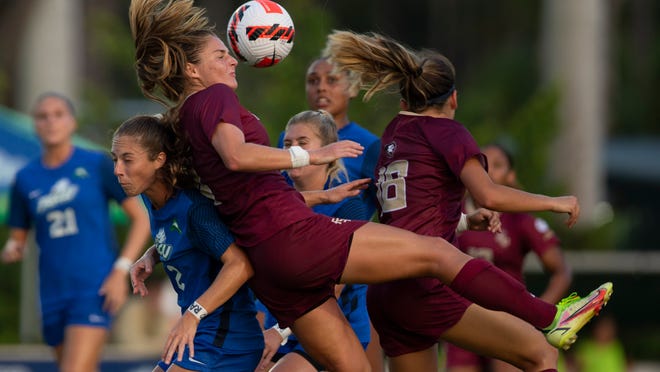 Jim Blankenship, FGCU’s coach, and his team knew it already. The Eagles proved that in a 4-0 defeat to the Seminoles on Thursday night at Pickering Field at FGCU Soccer Center.

“It was fun. Blankenship agreed. “How often do you get to an opportunity to play against the best team in the country? It was a great experience for our children. They were enthusiastic and worked hard.

“If we work hard, we can win this entire thing. As a coach I feel great about our effort. Just like last game, I feel like we’re getting better and better each game, and you can see the improvement. If we work hard, I believe we will be rewarded.

Mark Krikorian, FSU coach, thought that his team was a little flat.

“I don’ t think we started off as well as we should have,” he said. “Credit to Gulf Coast. They gave themselves a great opportunity and easily could have been up 1-0. But then, I think we regrouped and took a bit more control over the game.

More:Drink ’em if you got ’em: FGCU to allow alcohol sales at athletic events

A nice crowd of 1,111 was on hand for what turned out to be the first FGCU athletic event that had beer and wine sales. Although the intention to allow alcohol sales at FGCU home events had been announced last week it was only decided that this event would be held with this game. Fans could choose to buy $6 import beer or $5 domestic wine. At the beginning of the second period, sales were stopped.

The Seminoles (6-0) simply dominated the Eagles (22-4). They held possession for nearly the entire game in the FGCU section. FSU beat the Eagles by 22-2 overall, and 10-1 in shots at goal.

The Eagles had a chance at scoring early, just like FGCU lost to Florida 1-0 on Sunday.  Mia Justus was the FSU goalkeeper and saved Louise Lillback’s 8th-minute shot.

“Could have been up one. They had a great chance,  and hit the post, but very limited opportunities,” Blankenship said. We discussed the possibility of trying to cash in early.

The Seminoles, however, reacted differently to the Gators’ Sunday play by taking full control and passing the ball back-and-forth near midfield until they found a crack in Eagles defense.

Kirsten Pavlisko scored in the 16th minutes, her second goal unassisted of the season.

Krikorian commented that they scored a very good goal. Pavlisko was running through the play and had a great finish.

FGCU looked like it may get to the half down just a goal, but the Eagles were called for a foul that led to a penalty kick, and Emily Madril scored in the 42nd minute.

“A game changer. Blankenship stated that it was unfortunate. “That’s where you have to improve and learn.”

“We got the second goal just before the half, which was great timing for us and probably not-so-good timing for Gulf Coast,” Krikorian said.

Blankenship stated, “We’re still fighting, it’s just difficult, we’re still at 2-0.” “It’s unfortunate but it’s something that we have to learn from. The second goal is self-inflicted. The third goal is the same. You can’t concede these at this level but they are obviously the No. The No.1 team in the country is for a reason. They bring up people, and it opens doors.”

Krusinski made five saves before being replaced in the 64th minute by Katie Sullivan, who was tested immediately but made her only save.

After Pavlisko scored, the Seminoles increased their pressure but Krusinski kept it at 1-0 with three saves in five minutes.

Krikorian stated, “What can I tell you is that this team is really good and competitive.” He was speaking after his team beat the Gators by 5-2 last week. They will win a lot more games if they play so hard in the conference. Jim has a young team with a lot talent.

The Eagles play FAU in Boca Raton on Sunday. They can then catch their breath for a week, before returning home to face USF on Sunday, September 19.

Blankenship stated, “The most important thing for us is ultimately trying to get better every time we play.” “We expended a lot of energy tonight, just trying to survive more or less. Then it’s Sunday and it’s at their house, so it will be a challenge.

“Games such as this can be a great learning opportunity. Conference business is our responsibility.

Greg Hardwig, a sports reporter at The News-Press and Naples Daily News, is available for your questions. Follow him on Instagram, Facebook and Twitter: @NDN_Ghardwig, email him at ghardwig@naplesnews.com. Support local journalism with this special subscription offer at https://cm.naplesnews.com/specialoffer/