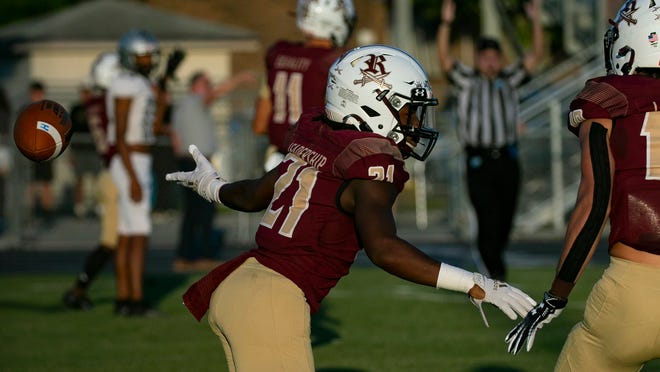 Riverdale had no trouble finding the endzone Monday night.

The Raiders Mariner 48-13 won in front of returning fans.

Riverdale fired on all cylinders right at the start. Romeo McKnight, a Raiders’ of Scrimmage player, interrupted Romeo McKnight’s 50-yard run less than 40 seconds into the second match. Riverdale’s Quarterback Brody Dorsey was the quarterback and threw three touchdowns (2-2).

Riverdale coach James Delgado said, “I’m proud of these guys.” The work was done behind the scenes. All of them deserve my admiration. We made mistakes here, and it is up to us to fix that.

1. The offense performed best throughout the year Raiders reached a season record of 48 points. Six players were able to reach the goal line, with two from Tyler Abrams as backup quarterback. Dorsey said, “We feel good. We have good chemistry.” You know, we’re brothers.

2. It spanned the Tritons backcourt, creating problems on nearly every play and restricting the Tritons’ offensive attack. Delgado said, “You did an excellent job.” Although it wasn’t flawless, they did fly and I always felt like there were 11 hats to the ball.

3. McKnight and Terry Jackson make a great running back pair for the Raiders. Both fullbacks recorded touchdowns receiving and rushing, and displayed their versatility in the backcourt.

1. They never lost heart despite all their weaknesses. Josh Nicholson (Mariner coach) said, “My boys fought till the end.” “And that is all I can request of you.”

2. Justin Lewis provided the Tritons with the spark they needed in the second quarter. Lewis was moved from quarterback to the start of the second period. He changed the dynamic of the offense, scoring a 2-yard touchdown run in the last game. Nicholson stated, “Justin’s an athletic.” He was a light in our lives. He is a hard worker and will give everything he can.

3. Early on, the Tritons were not afraid to take risks. Jacob Manning ran 12-yards after the Tritons made a fake kick to Justin Lewis and a punt to Fourth.

Register now using the link below and you will never miss another story.