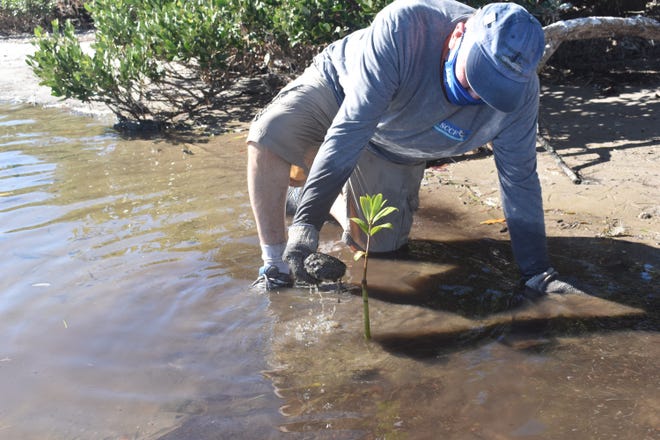 140 young red mangroves sit in different corners and countertops in Sanibel houses and enjoy the sunshine. They are waiting to be planted.

Volunteers who take care of the plants have learned about the important role mangroves play in Florida in the last online workshops. From protecting coastlines from storms to creating a kindergarten for a wide variety of marine life, the mangrove habitat is a vital resource.

The “Walking Trees,” as they are sometimes called, are part of Coastal Watch’s “Back to Our Roots” initiative as part of the Sanibel-Captiva Conservation Foundation’s educational branch – the Sanibel Sea School.

Kealy McNeal, the conservation initiative coordinator at the Sanibel Sea School, said the program was a way to get the community involved.

“Really, most of that is the educational component of the initiative,” said McNeal. “Not only do we let the volunteers grow mangroves, but they understand why they grow them: how animals rely on them, how to reduce erosion, manage water quality, and create a buffer against storm damage.”

Why mangroves are important

Mangroves can absorb energy from waves and protect beaches from erosion. Scientists predict an increase in the frequency and severity of storms. According to a 2015 study, there is “a potential doubling of the frequency of Atlantic hurricanes as a direct result of anthropogenic (man-made) climate change …”. The protection and growth of mangroves can help alleviate both natural problems and economic damage from these storms.

These unique ecosystems, sometimes referred to as “nature nurseries,” are also the incubator of the state’s $ 7.6 billion fishing industry, which provides 109,000 jobs, according to the Florida Department of Conservation.

Mangroves not only offer advantages at the roots, but the treetops also provide habitat for birds.

Eric Milbrandt, director of the SCCF Marine Laboratory, has identified areas in the region that have been degraded, namely mangroves and oyster reefs, he said.

SCCF has been working to restore these habitats for 17 or 18 years, he said. As part of this restoration project, three locations were identified – hemp, Benedict and bird keys.

“One island that is really important to wildlife is Hemp Key,” he said. “It’s a large colony of birds and a protected site, but the mangrove canopy is almost gone.”

So the restoration project will not only help protect the islands from the effects of climate change, it will also provide a beneficial habitat for birds and marine animals.

Back to our roots

For the first time since January, the Back to our Roots program hosted virtual workshops on “Mangrove ecology and the threats to which mangroves are exposed here in southwest Florida,” it says on its website.

While the workshops are closed for now, McNeal said more are planned for this year.

“We’re just about to end the season,” she said. But we plan for it to come back in the fall and get it going again with workshops and starter kits. “

More:Should a developer be allowed to destroy 30 acres of mangroves to build houses near Sanibel?

The starter kits that volunteers take home include a 1-gallon pot filled with soil and a red mangrove propagation that is about 10 inches long and shaped like a bean. Red mangroves are slightly easier to grow than white or black species, McNeal said.

“Really, just make sure they’re watered and given some love from time to time,” she said. “We got really great feedback from volunteers on survival rates.”

One volunteer, Ira Grasgreen, said he became interested after receiving an email about the program.

“With all of this climate change, and of course hurricanes, it sounded like a really cool initiative to help mangroves and oysters,” said Grasgreen. “SCCF has been a fantastic organization over the years and that seemed like a pretty cool thing.”

Grasgreen has already volunteered twice to plant mangroves. A third trip is planned for Friday. He said he has been in horticulture for about 33 years, so plants are a passion of his.

“It’s pretty neat on the way to Pine Island and Benedict Key,” he said. “We’re spreading the fossilized mussels and oyster shells and replanting some of the mangroves.”

Although the virtual workshops have ended, McNeal said there are still plants left.

Once the volunteers’ plants are ready this fall, they can head to the Hemp, Benedict and Bird Keys in Pine Island Sound with McNeal and others to plant the young mangroves.

“The reason we chose these restoration sites is because of the damage they suffered from Hurricane Charley in 2004 – and they were almost completely decimated,” said McNeal. “You came back very slowly.”

More information about the program, Coastal Watch, and the Sanibel-Captiva Conservation Foundation can be found online at: sancapcoastalwatch.org/back-to-our-roots