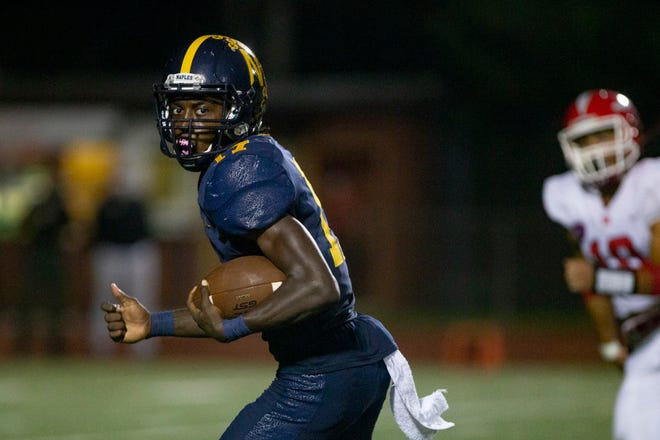 Almost exactly one year ago – 372 days to be precise – the Naples High School football team was in the midst of its worst loss in 23 years.

The Golden Eagles were clearly embarrassed. They trailed by 31 at Palmetto Ridge in the fourth quarter. It was their first loss to Collier County in seven years.

The game was over. But with a few minutes still left, Rick Martin, in his first game as head coach at his alma mater, knew his team needed a spark right then and there to make sure the rest of the season didn’t slip away.

Martin took a bold decision in an unusual circumstance. Martin made an unusual move and named a child who had never been to a game as the starting quarterback.

Listen:Our experts preview Week 5 on the Inside SWFL Football podcast

Stanley Bryant III went from receiver to signal-caller that night at Palmetto Ridge. Bryant hadn’t run the offense before, even though he did practice at QB. Martin, at the time, needed more than a passer.

“Stanley Bryant was chosen to be the quarterback because of his leadership skills and the way his teammates follow him,” Martin stated.

The Golden Eagles haven’t lost a regular-season game since. Bryant is 10-1 as the starter, with the only loss to eventual state champ Miami-Central is last year’s playoffs.

“I was just stepping up to whatever the team needed,” Bryant said. “I did what I had to do.”

Bryant will be at quarterback for Naples, making it nine consecutive regular-season wins. They also have a chance to deliver some revenge against Palmetto Ridge on Friday.

Not the first Stanley Bryant

Bryant’s story might be improbable, but it’s not unique. 21 years ago, the same story unfolded at the same school with the same quarterback and even the same jersey number.

Stanley Bryant Jr., a junior in 1999 led Naples’ football team to the playoffs. As a senior, he did it again. Bryant Jr. was the quarterback during the Golden Eagles’ rise to be the most successful team in Southwest Florida.

However, like his son, the elder Bryant wasn’t a born quarterback. He was a linebacker and also did a few practice reps under center. When injuries hit the Eagles in 1999, Bill Kramer, then-coach, turned to Bryant Jr. because that is why Martin chose Bryant III twenty years later.

Kramer wrote about it in his book, “Great Day … Today!” released in August:

“(Bryant) wasn’t a pure quarterback; his mechanics weren’t textbook. And I struggled with moving him from linebacker, where he was perhaps our best defender. But this guy fit our definition of a superstar to a T; he made everyone around him better. As soon as he entered the game, everyone raised their level of play. From that point on, there was no more quarterback controversy. Stanley Bryant was the man.”

As a former Naples player and now the head coach, Martin got to witness the journeys of both Bryants. The second-year coach was a sophomore offensive lineman for the Golden Eagles in 1999, and then the starting center in 2000 for the older Bryant’s senior year.

When Martin turned to his former teammate’s son to lead Naples following its crushing loss to Palmetto Ridge, the coach used the elder Bryant’s story to motive the new quarterback.

“It’s almost an identical story,” Martin said this, comparing his son to his father. “I told (the younger) Stanley that, too, when it was happening. I said, ‘I remember when I was playing, another No. 17 had to step in at quarterback. Big Stan wasn’t the greatest QB either, but because of his leadership skills and the way his teammates felt about him, we played hard for him.”

After he graduated from Naples in 2001, Stanley Bryant Jr. played at Southern Illinois. Bryant began his career as a quarterback. But, Bryant was more athletic than he was skilled at passing. Bryant then switched to defense in his last two years.

Bryant was no longer eligible to play, so he began coaching at a Carbondale high school while pursuing graduate studies. Bryant and Sherry, a Naples High graduate, had their two first sons in Carbondale, Stanley and Isaiah. Langston, an 11-month old boy, was recently born to Bryant and Sherry.

After Kramer invited Stanley to join them, the Bryants made their way back to Naples in 2006.

However, knowing his own journey and his son’s skills, the elder Bryant taught his son quarterback skills during youth football.

“I had a feeling he probably would play QB at Naples when he got there,” Bryant said a lot about his son. “I made it a point to make sure he had some experience taking snaps and getting him playing QB at a younger age.

“His last year with the Naples Gators, I pushed him to play running back so he would have that running experience. But I was pretty confident he would need to transition to QB.”

He ran for 582 yard and 7 touchdowns last year in nine games. This season he has 288 yards and 5 touchdowns in barely more than two games (he didn’t play in the fourth quarter of a Week 1 blowout, and last week’s game was stopped at halftime due to weather). Bryant is averaging 11.1 yards per carry.

The hard part was learning the intricacies of Naples’ veer option, which relies on the quarterback making split-second decisions about whether to hand the ball off or keep it.

“Stanley just works hard,” Martin spoke highly of his quarterback. “He is constantly learning. He’s always watching film, always asking me questions. He takes criticism well – he doesn’t mind when you tell him something is wrong. He wants to get better and doesn’t care how it has to happen.”

Still a work in progress

According to the QB, he was focused on his passing. He was a mechanic and footworker with his father, and the father and son frequently watch films together.

“This offseason I worked on it every day – all the routes and the timing,” Bryant said. “Passing the ball is one of the things we’re going to need as we get later in the playoffs. It’s something we couldn’t do last year.”

Bryant completed 9 of 13 passes in two and a quarter games. The 69.2 percent completion rate is a significant improvement over last year, when Bryant only completed 5 of 20 passes (25%)

“He’s done a great job leading the team from what I can see,” Stanley Bryant Jr. is now the assistant principal at Gulf Coast High School. “He’s made good progression on being able to read defenses. I can tell he’s getting a lot more comfortable.”

The younger Bryant is looking forward to chasing a state title this season – something his dad missed out on. Bryant, the older Bryant, graduated in 2001 before Naples won the state championship. This was the first time Southwest Florida teams had ever done so.

Stanley Bryant III also is enjoying his walk in his father’s footsteps. Bryant, like his father, also runs track at Naples and hopes to play football in college.

“I want to uphold and surpass the legacy he had,” Bryant said.

With COVID-19 cancellations going as a loss, FGCU teams work to avoid shutdowns