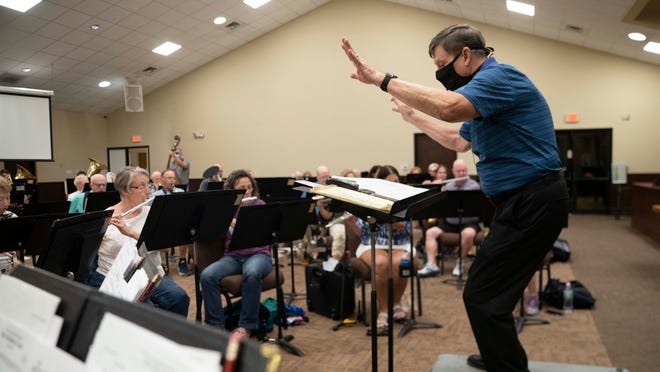 Naples Concert Band went all out and commissioned a musical piece for its 50th anniversary concert. The band is an expert at pulling off the unexpected.

The band played Steven Reineke’s “Rise of the Firebird” on Tuesday night. It was a sonorous overture featuring snappy trumpets and warbling flutes. There is also percussion punctuation. Let’s not forget a glockenspiel. Then they would tackle Ernesto Lecuona’s “Malagueña”, a minute and a half of caffeinated Latin rhythm that even bobbed the heads of the band members. He will perform his final concert in the Cambier Bandshell, on Sunday, October 17, at 7 p.m. (see details box). All music fans should get ready to dance.

Harris Lanzel who led the group for over 20 years, said that “I was stunned at the amount of musical talent there.” These talents include arranging, composing and more. Gene Davis (a band member) wrote the opening song, “For Starters”.

They are a great group to work alongside. We have lots of fun rehearsals and everyone is very passionate about the work they do. It’s a wonderful situation because everyone works hard and tries to do their best.

He added that the band isn’t one who loses their lips to musician’s languages over the summer. He believes that 90% of those who are part-time members of the band also belong to bands in their summer towns.

In winter, the Naples Concert Band will be close to 100 members strong. The season opens with 70 musicians and attracts up to 1000 people. It’s a world away from the group of 10 musicians that gathered at Norris Community Center to perform in 1972 in front a crowd of approximately 100.

“The tennis courts were right behind the audience,”Shirley Mann remembers that she has played the trumpet in the band’s 43-year history. Bob Thurston plays the euphonium, and she’s been playing with the band for over 50 years.

They may have not experienced a significant change in their motivation since that time. People who learn to play music instruments love it and wish to continue learning.

Mann said, “I’ve been playing since I was in third grade. It wasn’t something that I wanted to stop doing.” The instrument, like one of its youngest members Jeff Ricigliano (tenor saxophonist), is a New York school product. There instrumental studies are two to three more years in New York than they do elsewhere.

The music program is a great mix of Lanzel’s 31-year tenure as band director, and a place on the Pennsylvania Music Educators Hall of Fame. Both men love it.

Ricigliano recites a list of potential program numbers. These range from musical “Grease”, to marches, swing songs, and medleys.

Mann stated, “When Broadway shows come out we might play some of them.” Mann said, “There’s even a classic piece.”

Man recalls the time the band entertained Florida throughout the 50-year period.

“We played at Immokalee High School to promote band music. We were playing inside at Coastland Mall – I don’t know why, but we did a female band member takes off her dangling earrings: “They told us, ‘Now you work for The Mouse.'”

The 50th anniversary concert of the band on March 5th will take place in the great concert hall of Artis — Naples, where they will play the world premiere of “The Dolphins of Paradise Coast”, written for them by Rossano Galante, a film and television composer (“Fantastic Fourth”, “A Good Day To Die”).

Lanzel, Mann and Ricigliano all emphasize the family atmosphere of the band members – friendly banter, help for those who need it. There are actually families in the band, married couples, parents and children, but Ricigliano can win the award with four members playing.

“Personally, I joined because I played in high school years ago, and when my daughter started playing she wanted to play with me in some way. So we both got together, ”He added. It wouldn’t end the Ricigliano families.

He stated, “Right at the moment I have two daughters as well as my father,” We now have three generations that play in the band.

Harriet Howard Heithaus is a reporter for Naples Daily News/naplesnews.com. She reports about arts and entertainment. Contact them at 239-213-6091.

This is what:Opening concert of Naples Concert Band’s 50th anniversary season. Dickie Fleisher is the principal harpist of Naples Philharmonic and plays an arrangement for this concert. “Malaguena”This is a placeholder page for Mary Jo Carney. Doug Renfroe, Mary Jo Carney are the guest singers.

Enter:Donations of scholarships are accepted for free

Here are some things to keep in mind: Seating

Events and activities for Halloween in Naples, Bonita Springs, Immokalee

Naples Film Festival has it all