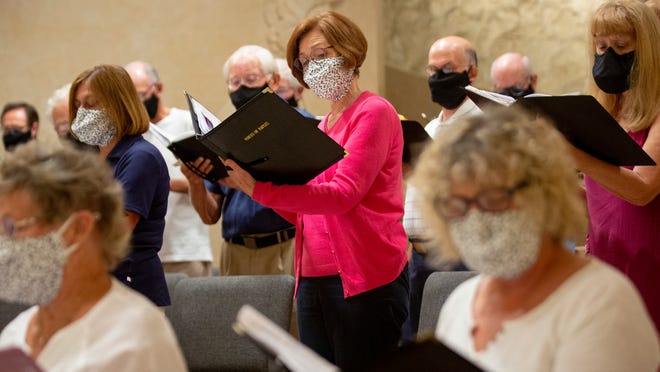 Doug Renfroe is choral director and composer by profession — in fact, a former director of the U.S. Navy Band’s Sea Chanters. But by last July, he was probably entertaining the idea of applying for a mental health counseling license.

The restrictions on Canadian travel had become prohibitive, and his wife had become ill. So the Renfroes skipped the annual summer pilgrimage North where Doug Renfroe would have played solo bass-baritone engagements before he began concert rehearsals as the director of Voices of Naples. The two settled in for what they thought would be a quiet Southwest Florida summer.

Renfroe laid down a strict set of rules: rehearsals would be on a limited time basis, with 30 minutes of singing and 15-minute breaks to ventilate and sanitize the sanctuary. Temperature checks and masks were mandatory; even performances were to be masked. What audiences will see this Sunday is the result of that decision.

It is hardly music made simple. On the program is “The Lord’s Prayer” sung in Swahili; the Voices come marching in to the “The Greatest Show,” from the musical P.T. Barnum bio-pic, “The Greatest Showman.” There are a centuries-old Irish folk song and dreamy work written in 2015, “Oceans and Stars,” from Amy Bernon, among others. The encore is a medley from an iconic rock group, something to make your Mercury rise.

First, however, the group had to find a face covering that worked.

“Singing with these were the pits,” Renfroe said of the standard fiber protective mask.

After a while you started literally hyperventilating because you’re breathing in carbon monoxide all the time. It’s quite different when you’re singing from when you’re speaking, obviously.”

One of its members came to the rescue, designing a multilayered singer’s mask that ballooned out, not as sharply as the “duck bill” variety that’s become associated with choral groups. But “nothing ever touches your mouth or lips,” Board President Mariellen LeMasters declared, demonstrating her metal-rimmed, low-chin mask.

The other need was to assure members who didn’t feel safe returning that Voices of Naples respected that decision.

“I’ve never encountered a group that’s more emotionally tied together than this one,” Renfroe said.

Allowing members to sit out the year also turned out to be a self-correction of the distancing problem Voices of Naples would have had if all 74 members had wanted to come back: “There’s no way they’d fit safely on the stage,” he said.

The group will grow by two next week for its final spring concert. As members receive vaccinations, they have begun filtering back into the organization. And it actually took on a new member: 16-year-old Cooper Atkins, a Naples High student. After the high school chorus and the Naples Philharmonic Youth Chorus shut down rehearsals during the pandemic, Atkins, who has countertenor abilities, was looking for a way to continue learning and singing. He found it in Voices of Naples.

“It’s a challenge, and everyone is always in a good mood,” he said of the group.

The other young performer, who was to be the group’s soloist, had to pass. Voices of Naples scholarship winner Luke Danni is at the University of Cincinnati College-Conservatory of Music and travel might have put him in quarantine when he returned.

For this concert, it just gives Voices of Naples more time to do what they love: sing.

“I think Doug challenges us and stretches as a group and individually, and because of that, we’ve gained a great appreciation of choral music,” said Gary Tincu, 74, who pointed out that its tours keep the singers on their best behavior.

All concert proceeds benefit its scholarship funds, but Voices of Naples members have raised their own money for biennial or triennial performing tours of countries from Eastern Europe to Rome and London.

This year, a planned tour of Scotland and Ireland would have to be postponed, Renfroe told the group at rehearsal Monday.

“But,” he comforted them, “it gives you another year to save for it.”

Harriet Howard Heithaus covers arts and entertainment for the Naples Daily News/naplesnews.com. Reach her at 239-213-6091.

Want more local news? If you’re already a subscriber, thank you! If not, please subscribe and help keep coverage of the most important local news coming.

Tickets: Reservations are required for either in-person attendance or live streaming on the group’s website: voicesofnaples.org