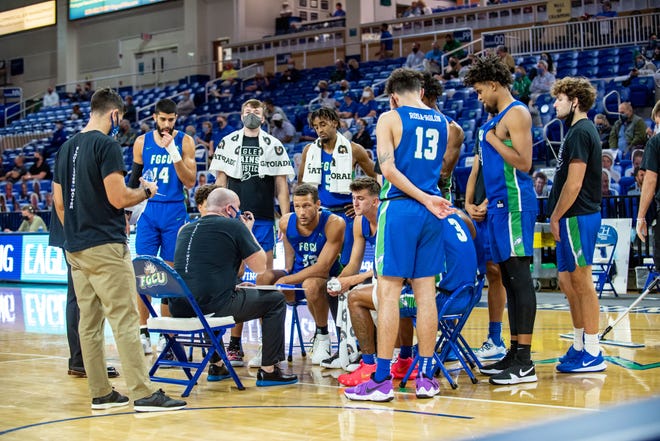 The ASUN conference is following the lead of many others across the country. That means that any team that has to forfeit a league match due to COVID-19 will lose its place in the conference standings.

FGCU men’s soccer was the first to start league play, doing so on Saturday at home against Jacksonville, with women’s soccer and volleyball doing so this week.

“We did adopt a policy that if you cannot field a team for a conference contest, the result would be a forfeit — win and loss recorded in ASUN standings,” ASUN commissioner Ted Gumbart said via email. “(The) NCAA will only recognize it as a ‘no contest’ but we will count it toward ASUN standings and seedings.”

Ken Kavanagh, FGCU’s athletic director, stated that the event is in keeping with what everyone’s doing nationwide. “The fact is that we all had it last year, and there wasn’t a vaccine. Now that the vaccine is available, it’s possible for teams to avoid having their players killed.

“(The policy) wasn’t a surprise to me,” said volleyball coach Matt Botsford, who had to sit out a handful of matches in the spring season after testing positive, although he had no symptoms. “I think considering the stance that the conference is taking, we’re hoping that we have a high vaccination rate, which limits exposure.”

“I don’t make the rules; we follow them,” women’s soccer coach Jim Blankenship said. “Our medical staff is very supportive of our team. I think only two of our 30 people are not vaccinated so I feel pretty confident and comfortable in our team.”

Of course, men’s and women’s basketball were affected the most by COVID-19 outbreaks in the last academic year. If another one occurs, the two biggest revenue generators in athletics have the most at stake. A missed revenue opportunity is lost if home games are cancelled, even more so when attendance was restricted due to the pandemic.

Karl Smesko, women’s basketball coach said that “I like this rule.” “Now, instead of all the rescheduling, and other things like that, if there aren’t enough players to play it is a loss. That is what I’m for.

Last season, men’s and women’s basketball had two-week pauses that began on subsequent days due to positive tests following the return after Christmas break.

The women did not have another one during a 26-3 season which ended in a loss to Michigan at the NCAA Tournament. The men took a two-week rest midway through their conference schedule. They lost another game because of follow-up testing at the end of the regular season.

Beer, wine at games this season:Drink ’em if you got ’em: FGCU to allow alcohol sales at athletic events

Student-athletes and the virus:FGCU sports and COVID-19: Athletics has been cramming to pass a different kind of test

Both the men’s and women’s teams had their conference schedules affected as well when opposing teams had outbreaks and couldn’t play. This caused a lot of confusion for the conference and its teams as they tried to figure out how or if they should reschedule. The men played just eight of the 16 scheduled conference matches.

Michael Fly, the men’s basketball coach said it was an enjoyable experience to deal with this last year. “I think that the (ASUN] policy is quite standard. Our school policy is also being followed in that players can make their own decisions about vaccinations.

“I believe our team did a great job in protecting our season from a vaccination standpoint. These are the only things that we can control.

Kavanagh stated that there are schools close to 100%. We are moving in that direction. We do have a  couple of teams that are still in harm’s way. If they don’t get their numbers up, they can run a risk if there was spread on their team.

“Thankfully, there are many other teams that are in good shape. From our standpoint, revenue-wise, both men and women’s basketball is in good shape.

FGCU was not the only basketball team to suffer a stoppage during the 2020-21 season.

Caleb Catto (FGCU men’s basketball coach), a Southwest Florida Christian grad said, “We weren’t the only ones going through this.” “Everybody around the world was trying for a way to get through it.”

Vaccines weren’t readily available then, but are now, and while having a mandate is not possible, Kavanagh and his coaches have done all they can to educate student-athletes on getting the vaccine.

Kavanagh stated, “We have been doing it since the vaccination came out.” I’m not a scientist. I barely got through biology in high school so I don’t have the ability to give them expertise advice, but there’s a lot of people on our campus, in our community that have that, and I trust them like that when I got vaccinated by my parents, and our kids got vaccinated, I’m trying to trust the system.

“Again, people have personal decisions for religious or other scenarios — health reasons — that I can understand. They have to make smart decisions to avoid getting in situations where they could (test positive).

And while even the vaccinated have had breakthrough cases of COVID-19, those numbers are significantly smaller than for the unvaccinated, and their dealings with the virus have been much less serious than the unvaccinated.

Kavanagh stated, “What I hear in the community is that they’re saying 90-plus percent are unvaccinated.” “I’m just sharing information — make educated decisions, which we’re all supposed to do every day.”

FGCU was fortunate to have Mike Estes, the senior assistant for administration, who led testing from the beginning of the pandemic and advised the ASUN throughout it.

Kavanagh said, “Mike’s done an amazing job.” “That’s what I look for in my department and the campus is looking for people like Mike.”

But protocols haven’t changed. Only one change is made to university protocols. For example, if a roommate tests positive for the virus and others are “close contacts”, they don’t automatically go into quarantine.

It’s a situation that will make it easier to keep as many eligible players as possible, despite the fact the pandemic is still ongoing.

“We knew going into the season that there were going to COVID-related hazards,” she stated. “I think we’re all trying to do our best to make sure that we’re there to play …  just to be sure we’re not in position to have to forfeit a match.”

Been there, still doing that

With so many student-athletes having the pandemic guidelines freshly in their minds — almost every sport took place after January because fall sports were delayed due to the pandemic — there’s at least the knowledge of so many returning of what needs to be done.

Smesko explained that the student-athletes of last year made many sacrifices. They were mostly focused on staying in the same team group. That can be stressful for college-age athletes.

“To ask for it again is really difficult. That’s why you hope that getting vaccine and still following guidelines of social distancing, things of that nature, can help them have a slightly more normal experience than they had a year ago.”

Botsford explained that the last year was “a struggle for a thousand reasons that had nothing to do with volleyball.” It was hard. I think getting into the fall and getting closer to some semblance of normalcy is helping us get through that.”

Catto explained that players and coaches simply want to be able to play basketball and spend time with their family. It can be difficult to get back together with your family when you are again isolated during a pandemic.

It has already had an impact on men’s soccer. Cormier stated that two of his players had been effected by the virus earlier in the season because they were positive for it.

Cormier acknowledged that the virus has caused some setbacks. “I applaud (FGCU President Mike) Martin and FGCU for taking this very seriously. They are dependent on the science. FGCU as an environment has taken it very seriously and is really trying to find ways to mitigate solutions, which I admire.”

Greg Hardwig, a sports reporter at The News-Press and Naples Daily News, is Greg Hardwig. Follow him on Instagram, Facebook and Twitter: @NDN_Ghardwig, email him at [email protected] Support local journalism with this special subscription offer at https://cm.naplesnews.com/specialoffer/