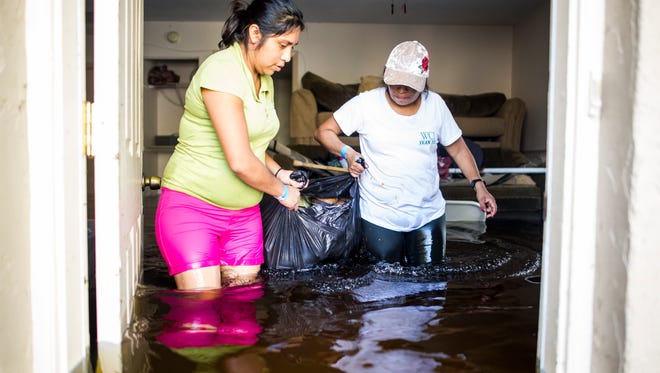 According to city studies in September 2017, Hurricane Irma dumped more than 8inches of rain on Bonita Springs within 24 hours. This storm came just two weeks after major rain events that lasted five days. It flooded the Imperial River. Nearby neighborhoods saw four feet of water pour into their streets.

As more than 200 homes suffered water and mold damage, there were mountains of furniture, appliances, and drywall. The stormwater problem was made a priority by the City Council. They ordered investigations to determine how they could be addressed. According to Amy Quaremba, water has been the main item in the city’s budget.

“The problem is not temporary,”Quaremba spoke. “The focus on that area has been consistent because it had the most consistent problem.”

Flood news from the city:Bonita Springs is awarded $5M by the State for its voluntary home-buyout program

After the storm, days later:Hurricane Irma – Searching for help in the Bonita Springs waterways at Quinn Street

American Structurepoint was hired by the City of Tampa last month to perform surveys and design a detailed construction plan to reduce future flooding around Quinn Street, Imperial Bonita Estates.

City officials haven’t sat idle the past four years, Assistant City Manager Matt Feeney said. Bonita Springs needs money to pay for the projects — lots of it. The Department of Housing and Urban Development offered a $11 million federal grant to staff in 2018. Feeney explained that the grant was not awarded for more than one year. However, they couldn’t spend it.

Feeney explained that the state legislature granted an additional $750,000 in 2020 for design services while they were finalizing grant payments.

The paperwork has been completed and American Structurepoint was selected by the city to create new stormwater mitigation designs in the region.

City Council was also presented with a larger study in 2019. It showed several methods to decrease flooding in these areas. These ranged from a $5.9 million storm sewer upgrade to a $57 million overhaul to the entire neighborhood including  flood walls, stationary pumps and more.

Feeney indicated that stormwater systems will be improved by the new designs. Another option is water storage and backflow prevention, which will prevent river water from entering the rainwater drains.

The stormwater grates that were located along Imperial Parkway were flooding in the days following Hurricane Irma. In the future, this would not happen again because of backflow prevention.

In the same area, a voluntary home purchase program is in place. This $5 million grant went to the city for at-risk properties. It was given to homeowners with lower- and moderate-incomes that didn’t have flood insurance after Hurricane Irma. Priority is given to homes with elderly, disabled or children.

Officials from the city are looking to buy the three first homes in the new program, which began in 2019.

“We need to get those people out of there,”Purdon, “The flooding problem is never going away.”

Thaddeus MAST is a South Lee County reporter at the Naples Daily News, and The Banner. Support his work by subscribing to our local news organization. You can find him at @thaddeusmast.

Estero, Bonita Springs to determine who will pay for Coconut Road improvements